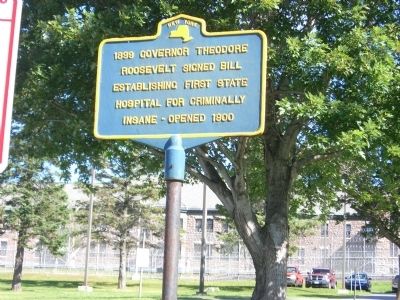 Topics and series. This historical marker is listed in these topic lists: Charity & Public Work • Science & Medicine. In addition, it is included in the Former U.S. Presidents: #26 Theodore Roosevelt series list. A significant historical year for this entry is 1899.

Location. 44° 43.366′ N, 73° 42.988′ W. Marker is in Dannemora, New York, in Clinton County. Marker is at the intersection of Cook Street (New York State Route 374) and Thayer Avenue, on the right when traveling west on Cook Street. Touch for map. Marker is in this post office area: Dannemora NY 12929, United States of America. Touch for directions.

More about this marker. The marker is located near the road in front of what Used to be the hospital. It is now an annex to the Clinton Correctional Facility, which is classified as a maximum security correctional facility for males 16 years of age and older. Clinton (a.k.a. Dannemora) is the largest and third oldest facility in the New York State correctional system, presently confining approximately 3,000 inmates. Clinton Correctional also happens to be the largest public employer in Clinton County. Its walls go right up to streets in Dannemora's main business district (which is a sight to behold). St. Dismas, a church built by inmates, is located within the walls. It is sometimes referred to as "New York's Siberia" due to the cold climate in Dannemora and the isolation of the area. Be advised that perimeter security frowns upon anyone taking a photo of the correctional facility. You may have your camera seized or have some quick talking to do. 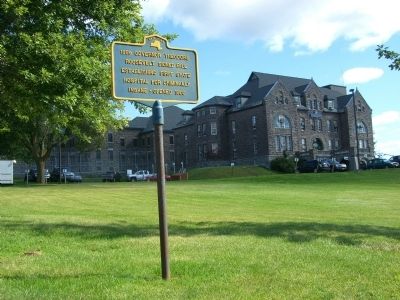