In Memory of Our Comrades / In Grateful Memory 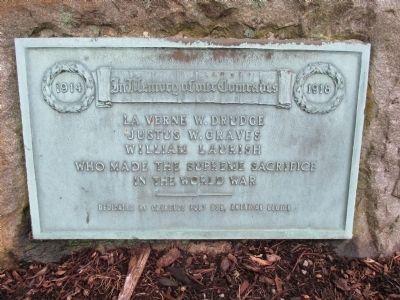 In grateful memory, the Town of Clarence dedicates this memorial to all who served during World War II with special reverence for those who made the supreme sacrifice. Lincoln H. Beard, Norman A. Engasser, George A. Fields, Joseph N. Fliss, Alfred Jurek, Cletus F. Leising, Royal G. Leo, Earl C. Long, Richard A. Martin. American Legion Port 838, Clarence Community Council. . This memorial was erected by American Legion Post 838, Clarence Community Council. It is in Clarence in Erie County New York

1914 In Memory of Our Comrades 1918. La Verne W. Drudge, Justus W. Graves, William Laurish, who made the supreme sacrifice in the World War. Dedicated by Clarence Post 838, American Legion.

Location. 42° 58.719′ N, 78° 35.996′ W. Marker is in Clarence, New York, in Erie County. Memorial can be reached from Cummings Drive. Markers are located in Clarence Town Park off of a parking lot on Cummings Road within the park. Touch for map. Marker is at or near 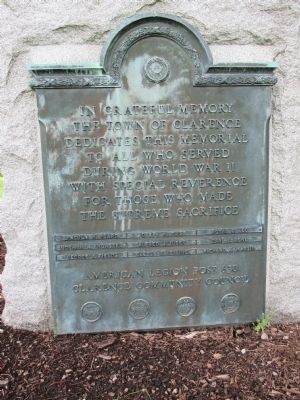 Other nearby markers. At least 8 other markers are within 3 miles of this marker, measured as the crow flies. Clarence Town Park (within shouting distance of this marker); Watchman's Flag Shanty, West Shore Railroad (about 600 feet away, measured in a direct line); Goodrich-Landow Log Cabin (about 700 feet away); Town of Clarence - First Grist Mill in Erie County (approx. ¼ mile away); Town of Clarence - Ransom's Grove (approx. 0.4 miles away); Niagara Frontier (approx. 1.8 miles away); Hull House (approx. 2.6 miles away); Clarence Center (approx. 2.8 miles away). Touch for a list and map of all markers in Clarence.

More about this marker. There are also memorial plaques for Vietnam/Korea and the Civil War, plus a G.A.R. cannon. 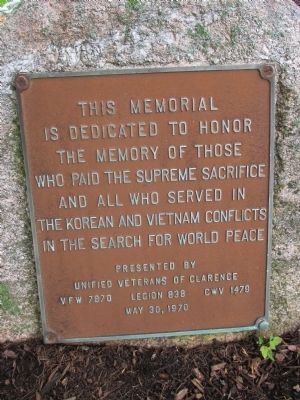 Photographed By Anton Schwarzmueller, June 17, 2014
3. Korean and Vietnam Conflicts Memorial Plaque
This memorial is dedicated to honor the memory of those who paid the supreme sacrifice and all who served in the Korean and Vietnam conflicts in the search for world peace, Presented by Unified Veterans of Clarence, VFW 7870, Legion 838, CWV 1479. May 30, 1970 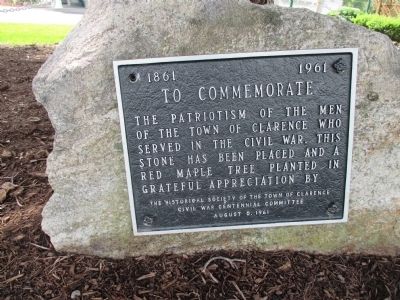 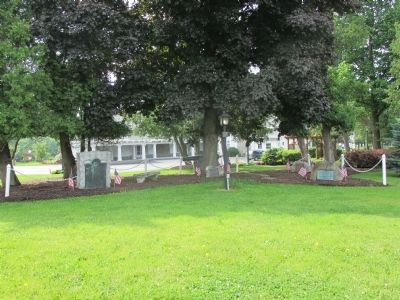 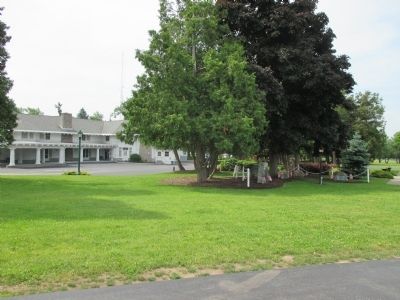 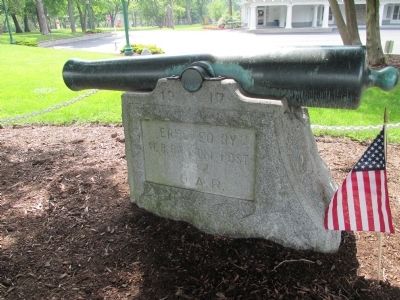