The Role of the Lieutenant Governor

The Lieutenant Governor is the Queen's representative in British Columbia, appointed by the Governor General for a term of at least five years. The Lieutenant Governor plays an important constitutional role, opening and closing sessions of the legislature, appointing and swearing-in Cabinet, and giving Royal Assent to all bills passed by the Legislative Assembly.

To ensure that there is always a First Minister, or premier, Lieutenant Governors have, on occasion, had to make the important decision of whom to call on to form the next government. The Lieutenant Governor also attends cultural events, ceremonies, and award presentations across the province to recognize the achievements of British Columbians. Visiting royalty and the Governor General are hosted by the Lieutenant Governor.

[Photo captions read]
1. After negotiating BC's terms of union with Canada in Ottawa, Joseph Trutch was appointed as the province's first Lieutenant Governor.
BC Archives, A-01004

2. When Lieutenant Governor Robert McInnes opened the new Legislative Buildings in 1898, BC had not yet adopted the party 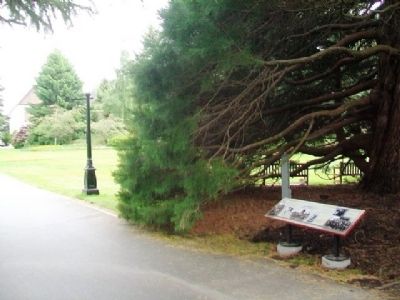 Click or scan to see
this page online
system. Competing factions made governments unstable. McInnes dismissed two premiers because they could not claim the confidence of the majority of the house. Because he could not maintain a stable government, McInnes himself became the only Lieutenant Governor dismissed from office in BC.
BC Archives, A-01004

3. Known as the "Father of British Columbia," James Douglas was born in Guyana to a free Creole mother from Barbados and a Scottish merchant planter. As Chief Factor of Fort Vancouver in Washington, in 1842 Douglas chose the new site for the fort on Vancouver Island. He was appointed the second Governor of the colony of Vancouver Island in 1851, and of the mainland colony of British Columbia in 1858, when the colony was in upheaval due to a gold rush.
BC Archives, D-06537

4. Sir Wilfred Laurier appointed Henri-Gustave Joly de Lothinere to replace McInnes. During his term from 1900-1906, Lothinere also intervened in government several times. He refused to accept the resignation of Premier James Dunsmuir, dismissed Premier Edward Gawlor Prior due to a conflict of interest, and appointed Richard McBride as Premier.
BC Archives, I-51642

5. In elections in 1952 and 1953, BC voters were split. Neither the Social Credit party nor the CCF (precursor to the New Democratic Party) gained a clear majority. 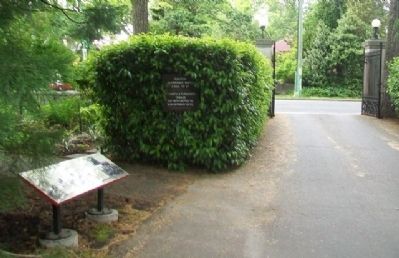 Photographed By William Fischer, Jr., May 21, 2014
3. The Role of the Lieutenant Governor Marker
Rockland Avenue Gate visible in right background
Governor Clarence Wallace made the decision to call on W.A.C. Bennett to form the next government in both cases. Voters confirmed Wallace's decision over the next two decades, and the Social Credit Party stayed in power until 1972.
BC Archives, D-06537

Topics. This historical marker is listed in these topic lists: Charity & Public Work • Government & Politics. A significant historical year for this entry is 1898.