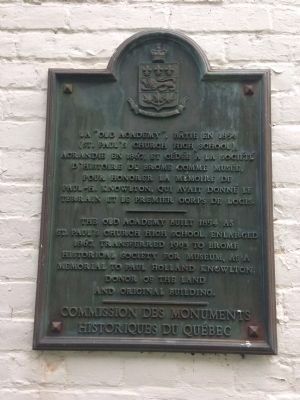 The Old Academy built 1854 as St. Paul's Church High School, enlarged 1867, transferred 1903 to Brome Historical Society for museum, as a memorial to Paul Holland Knowlton, donor of the land and original building.

Topics. This historical marker is listed in this topic list: Education. A significant historical year for this entry is 1854.

Location. 45° 13.168′ N, 72° 30.48′ W. Marker is in Knowlton, Québec, in Brome-Missisquoi. Marker can be reached from Lakeside (Québec Route 243) 0.1 kilometers north of Victoria Street. Marker is attached to the side of the Paul Holland Knowlton House on the grounds of the Brome County Historical Society museum. Touch for map. Marker is at or near this postal address: 140 Lakeside Street, Knowlton QC J0E 1V0, Canada. Touch for directions.

Other nearby markers. At least 2 other markers are within 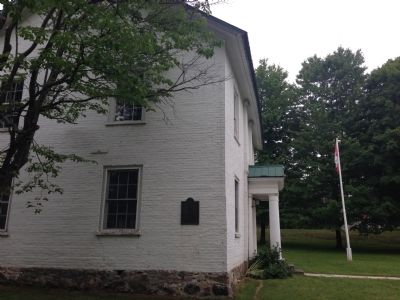 Photographed By J. Titolo, June 2014
2. The Old Academy Marker
attached to the side of the Paul Holland Knowlton House

Regarding The Old Academy. According to a nearby interpretive panel, the Academy was initially built in 1854 and had only one level. The second floor was added in 1867. 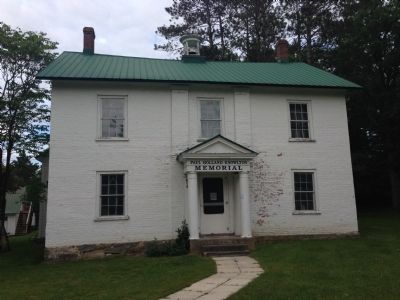