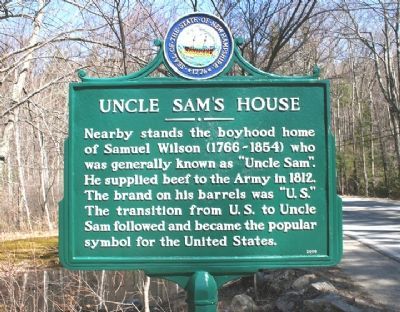 Photographed By Jean-Pierre & Cecile Mouraux, September 13, 2007
1. Uncle Sam's House Marker
Inscription.
Uncle Sam’s House. . Nearby stands the boyhood home of Samuel Wilson (1766 to 1854) who was generally known as “Uncle Sam.” He supplied beef to the Army in 1812. The brand on his barrel was “U.S.” The transition from U.S. to Uncle Sam followed and became the popular symbol for the United States. . This historical marker was erected in 2006 by NH Division of Historical Resources and the NH Department of Transportation. It is Near Mason in Hillsborough County New Hampshire

Nearby stands the boyhood home of Samuel Wilson (1766 to 1854) who was generally known as “Uncle Sam.” He supplied beef to the Army in 1812. The brand on his barrel was “U.S.” The transition from U.S. to Uncle Sam followed and became the popular symbol for the United States.

Erected 2006 by NH Division of Historical Resources and the NH Department of Transportation. (Marker Number 035.)

Topics. This historical marker is listed in these topic lists: Agriculture • Industry & Commerce • War of 1812. A significant historical year for this entry is 1812.

Location. 42° 44.369′ N, 71° 45.904′ W. Marker is near Mason, New Hampshire, in Hillsborough County. Marker is on Valley Road (New Hampshire Route 123) near Cascade Road, on the right when traveling south. Touch for map. Marker is in this post office area: Greenville NH 03048, United States of America. Touch for directions.

Other nearby markers. At least 8 other markers are within 11 miles of this marker, measured as the crow flies. Near this spot was the residence and garrison of John Fitch (approx. 6.8 miles away in Massachusetts); Captain Josiah Crosby / Lieutenant Thompson Maxwell (approx. 8 miles away); 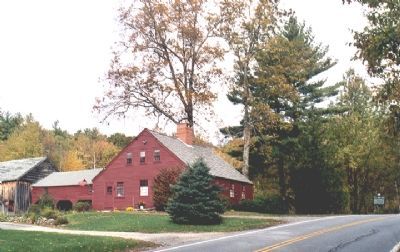 More about this marker. This marker replaced a marker with the same title and text originally erected in 1966.

Regarding Uncle Sam’s House. Samuel Wilson or “Uncle Sam” (1766–1854) grew up in Mason and the house in which he lived still stands on Valley Road in Mason. He became famous for his meat packing company in Troy, New York, which supplied meat to the army during the War of 1812. He stamped his barrels with “US” for United States, but people began to say “That’s Uncle Sam!” (In those days the term “Uncle” was a term of endearment.) After making his fortune in Troy, he returned to Mason where he married his childhood sweetheart, Elizabeth “Betsey” Mann. Her father, Capt. Benjamin Mann led 26 men from Mason to the Battle of Bunker Hill.
Source: http://home.earthlink.net/~georgeo/mason_nh.htm 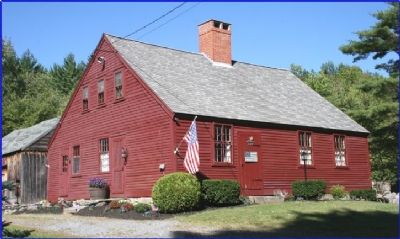 Additional commentary.
1. Uncle Sam's House open for tours by appointment
The childhood home of the original Uncle Sam, this 230-year-old, 1770’s red clapboard Cape on four acres was authentically restored around the time the original marker was installed in 1966. In 2004, Jean-Pierre & Cecile Mouraux purchased the house.

The Mouraux's also have an "Uncle Sam" museum in Sonoma, California. They've turned Uncle Sam's House, shown on this marker page, into a private mini-museum. By appointment, the house is open to visits about once a month, as well as September 13th (to celebrate Samuel Wilson's birthday) and the first week of February. Visitors wishing to tour the house can coordinate directly with the owners. The best way to arrange an appointment is via their email address, posterco@pacbell.net.

They've also published a book, Who Was “Uncle Sam?”, which is available in book-stores, on-line (Amazon, ebay, etc) or directly from them by contacting them at the same email address. 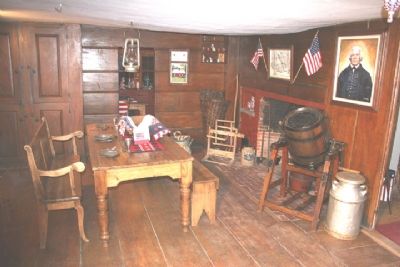 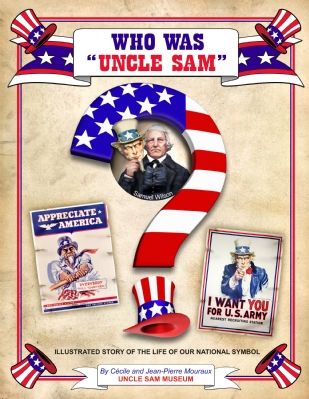