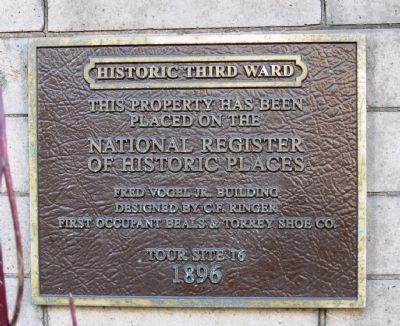 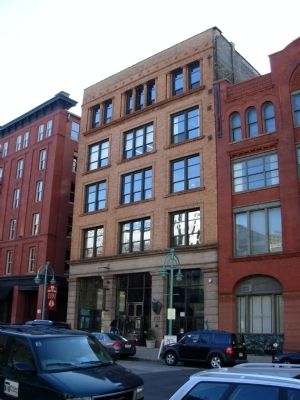 Regarding Fred Vogel Jr. Building. Architect C.F. Ringer designed the Fred Vogel Jr. Building in 1896. Vogel, a tanning industry mogul in Milwaukee, then leased the building to Beals & Torrey, a manufacturer and distributor of rubber and leather footwear, who occupied the space for 25 years. Renovated in 1992, the building now accommodates a mixture of businesses such as YamaYoga, the Tom Queoff Sculpture Studio and other service businesses.
-Historic Third Ward Walking Tour brochure
Credits. This page was last revised on June 16, 2016. It was originally submitted on June 5, 2014, by Paul Fehrenbach of Germantown, Wisconsin. This page has been viewed 663 times since then and 32 times this year. Last updated on July 16, 2014, by Keith S Smith of West Chester, Pennsylvania. Photos:   1, 2. submitted on June 5, 2014, by Paul Fehrenbach of Germantown, Wisconsin. • Bill Pfingsten was the editor who published this page.
Share this page.