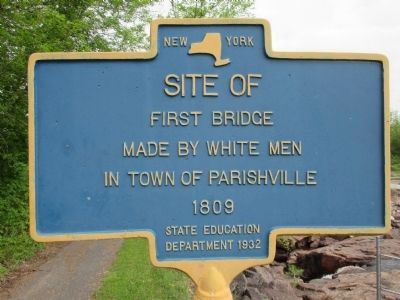 Photographed By Anton Schwarzmueller, May 17, 2015
1. Site Of First Bridge Marker
Inscription.
Site of first bridge made by white men in Town of Parishville 1809 . This historical marker was erected in 1932 by State Education Department. It is in Parishville in St. Lawrence County New York

Topics. This historical marker is listed in these topic lists: Bridges & Viaducts • Settlements & Settlers. A significant historical year for this entry is 1809.

Location. 44° 37.665′ N, 74° 48.941′ W. Marker is in Parishville, New York, in St. Lawrence County. Marker can be reached from Main Street (State Highway 72), on the right when traveling west. Located back from the road on the walking trail that leads to the foot bridge near the dam. Touch for map. Marker is in this post office area: Parishville NY 13672, United States of America. Touch for directions.

Other nearby markers. At least 8 other markers are within 7 miles of this marker, measured as the crow flies. Parish Tavern (within shouting distance of this marker); Parishville (about 500 feet away, measured in a direct line); West Branch St. Regis River (about 500 feet away); First Church (approx. 2.2 miles away); Site of Log Cabin of Luke Brown (approx. 4.3 miles away); This was the First Road in the Town of Parishville (approx. 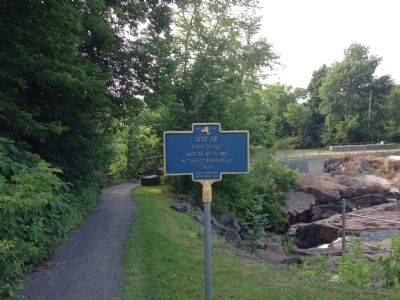 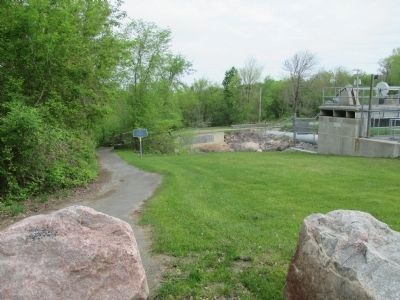 Photographed By Anton Schwarzmueller, May 17, 2015
3. Southward From NY Route 72 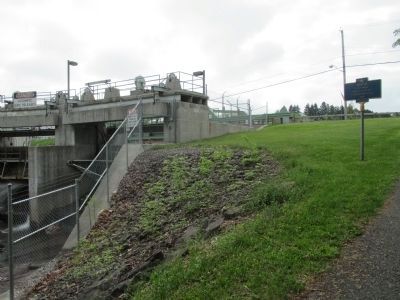