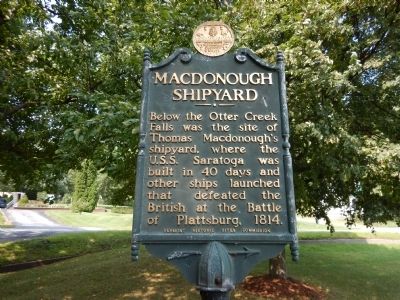 By Kevin Craft, August 1, 2014
1. Macdonough Shipyard Marker
Inscription.
Macdonough Shipyard. . . Below the Otter Creek Falls was the site of Thomas Macdonough's shipyard, where the U.S.S. Saratoga was built in 40 days and other ships launched that defeated the British at the Battle of Plattsburgh, 1814. . This historical marker was erected in 1949 by Vermont Historic Sites Commission. It is in Vergennes in Addison County Vermont

Below the Otter Creek Falls was the site of Thomas Macdonough's shipyard, where the U.S.S. Saratoga was built in 40 days and other ships launched that defeated the British at the Battle of Plattsburgh, 1814.

Topics. This memorial is listed in these topic lists: Industry & Commerce • War of 1812 • Waterways & Vessels. A significant historical year for this entry is 1814. 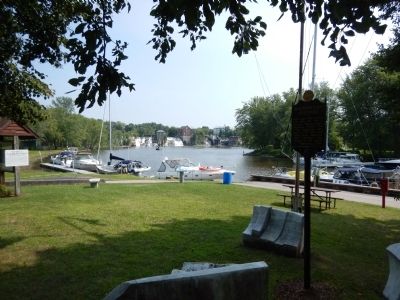 By Kevin Craft, August 1, 2014
2. Macdonough Shipyard Marker
Marker is in the foreground, Otter Falls is in the background

More about this marker. Marker is located in a small park near the water with an adjacent marina. 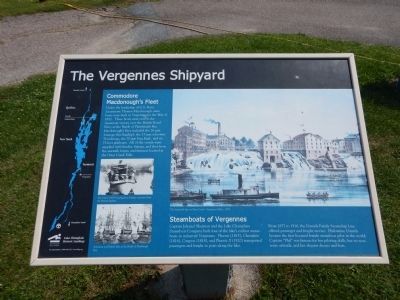 By Kevin Craft, August 1, 2014
3. Vergennes Shipyard Interpretive Panel
Commodore Macdonough's Fleet
Under the leadership of U.S. Navy Lieutenant Thomas Macdonough, nine boats were built in Vergennes for the War of 1812. These boats were vital to the American victory over the British Royal Navy at the Battle of Plattsburgh Bay. Macdonough's fleet included the 26-gun Saratoga (his flagship), the 17-gun schooner Ticonderoga, the 20-gun brig Eagle, and six 75-foot gunboats. All of the vessels were supplied with lumber, fittings, and shot from the sawmill, forges, and furnaces located at the Otter Creek Falls.

Steamboats of Vergennes
Captain Jahaziel Sherman and the Lake Champlain Steamboat Company built four of the lake's earliest steamboats in industrial Vergennes. Phoenix (1815), Champlain (1816), Congress (1818), and Phoenix II (1820) transported passengers and freight to ports along the lake. From 1877 to 1916, the Daniels Family Steamship Line offered passenger and freight service. Philomène Daniels became the first licensed female steamboat pilot in the world; Captain "Phil" was famous for her piloting skills, her no-nonsense attitude, and her elegant dresses and hats.
Credits. This page was last revised on June 16, 2016. It was originally submitted on August 4, 2014, by Kevin Craft of Bedford, Quebec. This page has been viewed 459 times since then. Photos:   1, 2, 3. submitted on August 4, 2014, by Kevin Craft of Bedford, Quebec. • Bill Pfingsten was the editor who published this page.
Share This Page.