Constituted April 10, 1874, in the building of the First Baptist Church, Murfreesboro, then located 200 yards east on the north side of East Main Street. The Tennessee Baptist Convention is the channel through which Southern Baptist churches in Tennessee conduct a program of missions, evangelism, education, and other benevolent ministries.

Topics. This historical marker is listed in this topic list: Churches & Religion. A significant historical date for this entry is April 10, 1884. 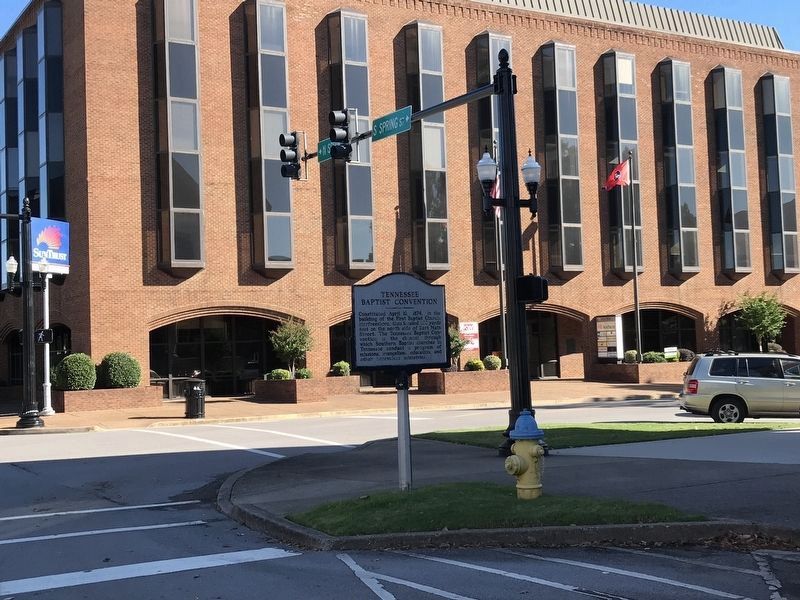 Click or scan to see
this page online
(about 400 feet away); Murfreesboro Confederate Soldiers Monument (about 500 feet away); Forrest's Murfreesboro Raid (about 500 feet away). Touch for a list and map of all markers in Murfreesboro.
Credits. This page was last revised on October 17, 2021. It was originally submitted on August 8, 2014, by Deanna Lack of Sparta, Tennessee. This page has been viewed 338 times since then and 12 times this year. Photos:   1. submitted on September 8, 2021, by Darren Jefferson Clay of Duluth, Georgia.   2. submitted on October 17, 2021, by Duane Marsteller of Murfreesboro, Tennessee. • Al Wolf was the editor who published this page.
Share this page.