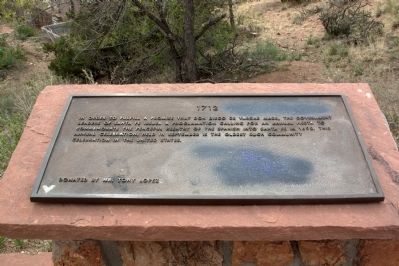 Photographed By J. J. Prats, April 18, 2014
1. 1712 Marker
Inscription.
1712. . In order to fulfill a promise that Don Diego de Vargas made, the government leaders of Santa Fe issued a proclamation calling for an annual fiesta to commemorate the peaceful reentry of the Spanish into Santa Fe in 1692. This annual celebration held in September is the oldest such community celebration in the United States. . This historical marker was erected in 1986 by Mr. Tony Lopez. It is in Santa Fe in Santa Fe County New Mexico

In order to fulfill a promise that Don Diego de Vargas made, the government leaders of Santa Fe issued a proclamation calling for an annual fiesta to commemorate the peaceful reentry of the Spanish into Santa Fe in 1692. This annual celebration held in September is the oldest such community celebration in the United States.

Topics. This historical marker is listed in these topic lists: Colonial Era • Entertainment • Settlements & Settlers. A significant historical year for this entry is 1692. 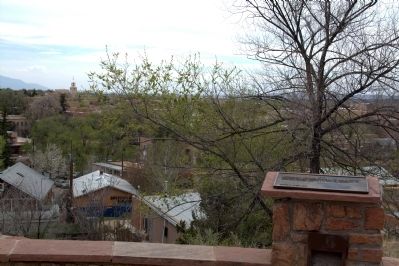 Also see . . .
1. Santa Fe Fiesta Council Website. Excerpt: “The cry of ‘Viva la Fiesta’ has been reverberating through the streets of Old Santa Fe every autumn for 301 years. The sound generates a curious blend of thanksgiving, revelry and pride in the hearts of Santa Feans who celebrate Fiesta annually to commemorate Don Diego de Vargas’ peaceful reoccupation of the City of Holy Faith in 1692.

“The historic capital is one of the oldest in the United States. It was established by Don Juan de Oñate at San Gabriel in 1598 and moved over 30 miles south to the foot of the Sangre the Cristo Mountains were Santa Fe was founded in 1610. In 1680 the Indians revolted, burned the city and drove out the Spanish colonists, who fled to Guadalupe del Paso, now Juarez, Mexico. They rescued from the burning church the 29-inch wood carved Marian statue, La Conquistadora, originally brought to Santa Fe in 1625 by the missionary Fray Alonso de Benavides.” (Submitted on August 14, 2014.)

2. Wikipedia Entry for Fiestas de Santa Fe. “The start of Fiestas is marked by the beginning of the Novena masses, which start during the Knighting and Coronation of Don Diego de Vargas and La Reina de Santa Fe in which a procession which takes La Conquistadora from the Cathedral Basilica to the Rosario Chapel, at Rosario Cemetery in Santa Fe. From there 9 masses are held throughout the week and at the end of the week La Conquistadora is returned from Rosario Chapel to the Cathedral Basilica that following weekend. Those masses are carried out and are made as a tribute to the promise that Don Diego de Vargas made to La Conquistadora, and is carried through until September which includes the burning of Zozobra, also known as ‘Old Man Gloom’, a 50 ft tall marionette that symbolizes the hardships and despair of the past year. This is followed by 3 days of celebration that includes a reenactment of Don Diego de Vargas’s return to the city, a children’s pet parade, the Historical/Hysterical Parade, the Fiesta Ball and Roman Catholic masses of thanksgiving. During the festival, the Santa Fe Plaza is filled with arts & crafts and food booths, and mariachis play throughout the city. Fiestas concludes with mass at the St. Francis Cathedral followed by a candlelight procession to the Cross of the Martyrs” at the top of the walk where this marker is located. (Submitted on August 14, 2014.)

3. Santa Fe Fiesta 2012 - Parades. This five minute video was posted on YouTube by Milan Kalus. “There were four parades during Santa Fe Fiesta 2012. First was the arrival of Don Diego de Vargas and La Conquistadora to the main square on Friday. The second was Children’s Parade on Saturday morning. The third was Solemn Procession on Sunday morning to the cathedral. The last parade was the parade of adults on Sunday afternoon that closed the Fiesta.” (Submitted on August 14, 2014.)

4. 2009 Santa Fe 400th Jubilee Mass - St. Francis Cathedral–Basilica. This well-lit, well-edited video of the pagentry with excellent audio of the music, speeches and prayer is 1½ hours long. Unfortunately the video aspect ratio is wrong. It was posted on YouTube by Bill O’Donnell. “St. Francis Cathedral–Basilica in Santa Fe, NM, celebrating its 400th Anniversary in Santa Fe, the city of Holy Faith, New Mexico. Msgr. Jerome Martinez y Alire, Rector of the Cathedral–Basilica was the Celebrant.” (Submitted on August 15, 2014.)
Credits. This page was last revised on June 16, 2016. It was originally submitted on August 14, 2014, by J. J. Prats of Powell, Ohio. This page has been viewed 355 times since then and 17 times this year. Photos:   1, 2. submitted on August 14, 2014, by J. J. Prats of Powell, Ohio.
Share this page.