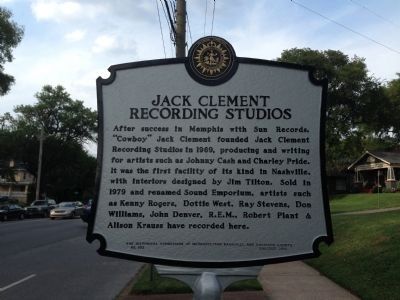 After success in Memphis with Sun Records, "Cowboy" Jack Clement founded Jack Clement Recording Studios in 1969, producing and writing for artists such as Johnny Cash and Charley Pride. It was the first facility of its kind in Nashville, with interiors designed by Jim Tilton. Sold in 1979 and renamed Sound Emporium, artists such as Kenny Rogers, Dottie West, Ray Stevens, Don Williams, John Denver, R.E.M., Robert Plant & Alison Krauss have recorded here.

Erected 2013 by The Historical Commission of Metropolitan Nashville and Davidson County. (Marker Number 152.)

Topics and series. This historical marker is listed in these topic lists: Arts, Letters, Music • Entertainment • Industry & Commerce. In addition, it is included in the Tennessee, The Historical Commission of Metropolitan Nashville and Davidson County series list. A significant historical year for this entry is 1969. 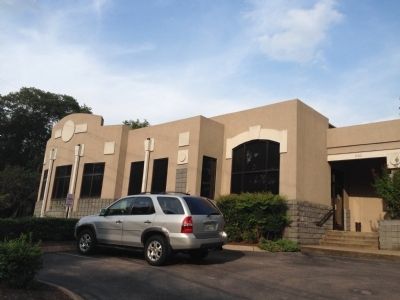 Click or scan to see
this page online
traveling south. Located at 3100 Belmont Blvd on the east side of the street in front of the Sound Emporium Recording Studios. Touch for map. Marker is in this post office area: Nashville TN 37204, United States of America. Touch for directions. 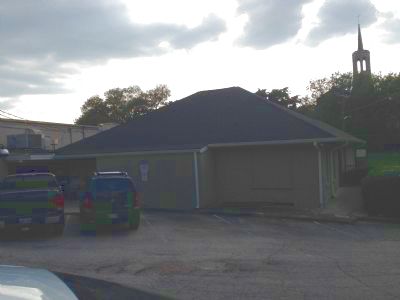