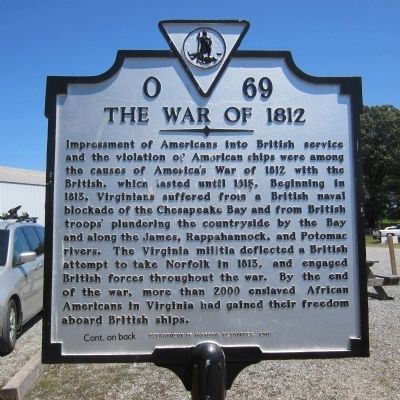 The War of 1812. Impressment of Americans into British service and the violation of American ships were among the causes of America’s War of 1812 with the British, which lasted until 1815. Beginning in 1813, Virginians suffered from a British naval blockade of the Chesapeake Bay and from British troops’ plundering the countryside by the Bay and along the James, Rappahannock, and Potomac rivers. The Virginia militia deflected a British attempt to take Norfolk in 1813, and engaged British forces throughout the war. By the end of the war, more than 2000 enslaved African Americans in Virginia had gained their freedom aboard British ships. 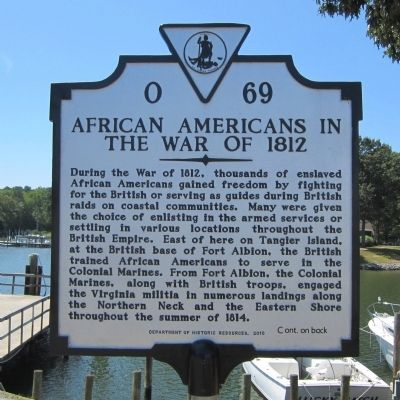 Click or scan to see
this page online
Albion, the Colonial Marines, along with British troops, engaged the Virginia militia in numerous landings along the Northern Neck and the Eastern Shore throughout the summer of 1814.

Topics and series. This historical marker is listed in these topic lists: African Americans • War of 1812. In addition, it is included in the Virginia Department of Historic Resources series list. A significant historical year for this entry is 1812.

Location. 37° 50.541′ N, 76° 17.246′ W. Marker is in Reedville, Virginia, in Northumberland County. Marker can be reached from Buzzards Point Road (Virginia Route 656) 0.6 miles east of Fairport Road (Virginia Route 646), on the right when traveling south. Located in the Buzzard Point Marina parking lot. Touch for map. Marker is at or near this postal address: 468 Buzzards Point Road, Reedville VA 22539, United States of America. Touch for directions. 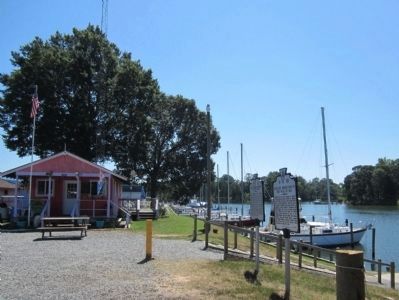 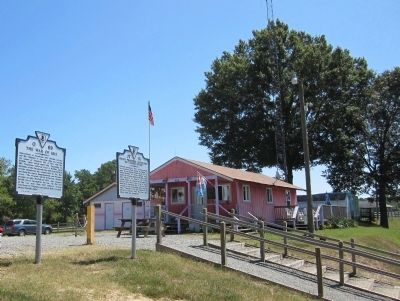