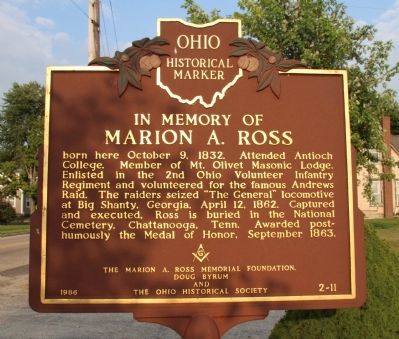 Photographed By Dale K. Benington, August 21, 2014
1. Marion A. Ross Marker
Inscription.
Marion A. Ross. In Memory of. Born here October 9, 1832. Attended Antioch College. Member of Mt. Olivet Masonic Lodge. Enlisted in the 2nd Ohio Volunteer Infantry Regiment and volunteered for the famous Andrews Raid. The raiders seized "The General" locomotive at Big Shanty, Georgia, April 12, 1862. Captured and executed, Ross is buried in the National Cemetery, Chattanooga, Tenn. Awarded posthumously the Medal of Honor, September 1863. . This historical marker was erected in 1986 by The Marion A. Ross Memorial Foundation, Doug Byrum, and The Ohio Historical Society . It is in Christianburg in Champaign County Ohio

Topics and series. This historical marker is listed in these topic lists: Patriots & Patriotism • War, US Civil. In addition, it is included in the Medal of Honor Recipients, and the Ohio Historical Society / The Ohio History Connection series lists. A significant historical date for this entry is April 12, 1835. 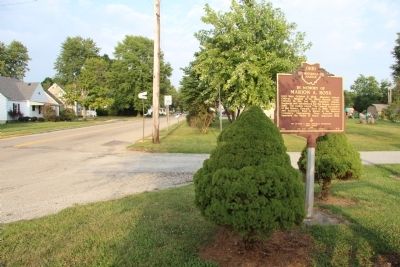 Click or scan to see
this page online
West Pike Street. This historical marker is located at the western edge of the town, at the southwest corner of the intersection. Touch for map. Marker is in this post office area: Christiansburg OH 45389, United States of America. Touch for directions. 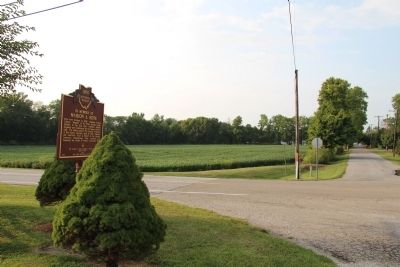 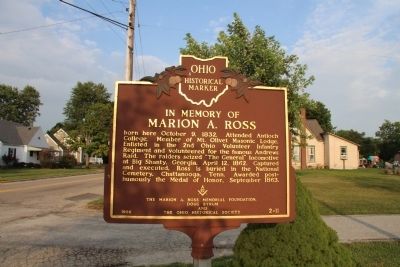