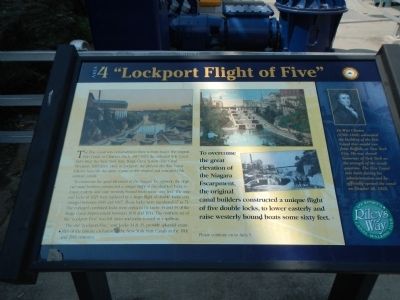 To overcome the great elevation of the Niagara Escarpment, the original canal builders constructed a unique flight of 5 double locks, to lower easterly and raise westerly bound boats some sixty feet.

The Erie Canal was constructed in three historic stages: the original Erie Canal, or Clinton’s Ditch, 1817-1825; the enlarged Erie Canal, 1835-1862; the New York State Barge Canal System (Erie Canal Division), 1905-1918. Here in Lockport, the present day Erie Canal follows basically the same course as the original and enlarged 19th century canals.
To overcome the great elevation of the Niagara Escarpment, the original canal builders constructed a unique flight of five double locks, to lower easterly and raise westerly bound boast some sixty feet. The original locks of 1825 were replaced by a larger flight of double locks constructed between 1836 and 1847. These locks were numbered 67 to 71. The enlarged combined locks were replaced by Locks 34 and 35 of the Barge Canal Improvement between 1910 and 1914. The northern set of the “Lockport Five” was left intact and today is used as a spillway.
The old “Lockport 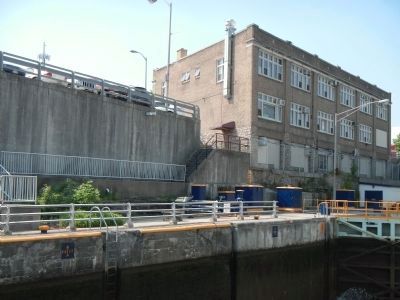 By Barry Swackhamer, June 2, 2014
2. “Lockport Flight of Five” Marker
The marker is across the canal below the stairs.
Five" and Locks 34 & 35, provide splendid examples of the historic evolution of the New York State Canals in the 19th and 20th centuries.

Sidebar on the right
DeWitt Clinton (1769-1828) advocated the building of the Erie Canal that would run from Buffalo to New York City. He was elected Governor of New York on the strength of the canal question. The Erie Canal was built during his administration and he officially opened the canal on October 26, 1825.

Topics and series. This historical marker is listed in this topic list: Waterways & Vessels. In addition, it is included in the Erie Canal series list.

More about this marker. This marker is on the south side concrete walkway of Locks 34 & 35.