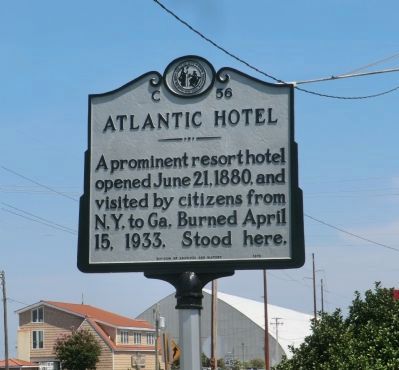 Photographed By Don Morfe, August 15, 2014
1. Atlantic Hotel Marker
Inscription.
Atlantic Hotel. . A prominent resort hotel opened June 21 1880, and visited by citizens from N.Y. to Ga. Burned April 15, 1933. Stood here. . This historical marker was erected in 1978 by Division of Archives and History. It is in Morehead City in Carteret County North Carolina

Erected 1978 by Division of Archives and History. (Marker Number C-56.)

Topics and series. This historical marker is listed in this topic list: Landmarks. In addition, it is included in the North Carolina Division of Archives and History series list. A significant historical date for this entry is April 15, 1933.

Other nearby markers. At least 8 other markers are within 3 miles of this marker, measured as the crow flies. North Carolina Bankers Association (within shouting distance of this marker); Teacher's Assembly (North Carolina Education Assn.) (about 300 feet away, measured in a direct line); Confederate Salt Works (about 500 feet away); Fort Macon (approx. 1.8 miles away); Union Artillery 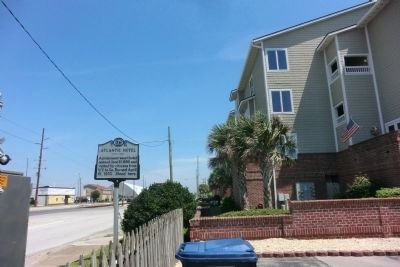