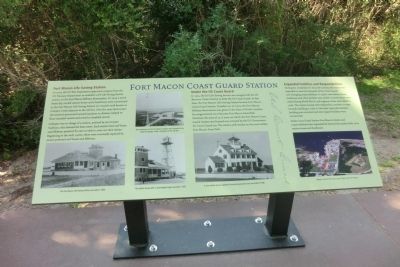 Fort Macon Life-Saving Station
In 1903, the US War Department approved a request from the US Treasury Department to establish a US Life-Saving Service station on the Fort Macon Military Reservation. In 1904 a wood frame hip-roofed station house and a boathouse were constructed as the Fort Macon Life-Saving Station on a marsh creek known as Cowpen Creek adjacent to the old fort. Over the next eleven years the station’s personnel assisted mariners in distress, helped refloat stranded vessels and towed in disabled vessels.

Click or scan to see
this page online
to the State of North Carolina by congressional act to become Fort Mason State Park. However, the tract of 22.6 acres on which the Fort Macon Coast Guard Station was located was retained by the US Government for Coast Guard use. The station still resides on this tract within Fort Macon State Park.

Expanded Facilities and Responsibilities
During the remainder of the 20th Century, the station was expanded to meet the demands of the Coast Guard’s ever-changing responsibilities. In 1938 a new station house, boathouse and other facilities were added. Concrete docks were added during World War II, and engineer shops were added in 1948. The station houses were replaced by a modern 70-man barracks building in 1965. In the early 1990s the barracks buildings was renovated and new support facilities were constructed.

(captions)
(lower left) The Fort Macon Life-Saving Station was built in 1904
(upper center) The boathouse for the Fort Macon station was situated at the head of Cowpen Creek, northwest of the old fort.
(lower center-left) The station house with a new lookout tower erected in 1935.
(lower center-right) A new station house capable of housing twenty-five men was built in 1938.
(lower right) Modern view of the Coast Guard Station and Fort Macon.

Topics. This historical marker is listed in these topic lists: Forts and Castles • Waterways & Vessels. A significant historical year for this entry is 1903.