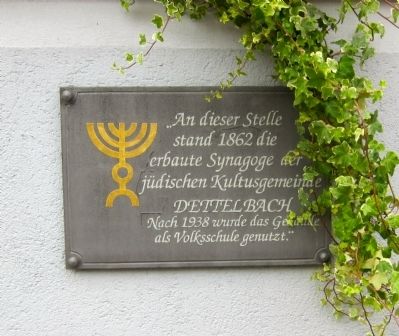 On this site stood the synagogue of the Jewish community of Dettelbach, built in 1862. After 1938 the building was used as a grade school.

Topics. This historical marker is listed in this topic list: Churches & Religion. A significant historical year for this entry is 1862.

Location. 49° 48.107′ N, 10° 9.618′ E. Marker is in Dettelbach, Bayern (Bavaria), in Kitzingen. Marker is on Häfnermarkt just north of Sackgasse when traveling north. Touch for map. Marker is at or near this postal address: Haus Häfnermarkt 4, Dettelbach BY 97337, Germany. Touch for directions. 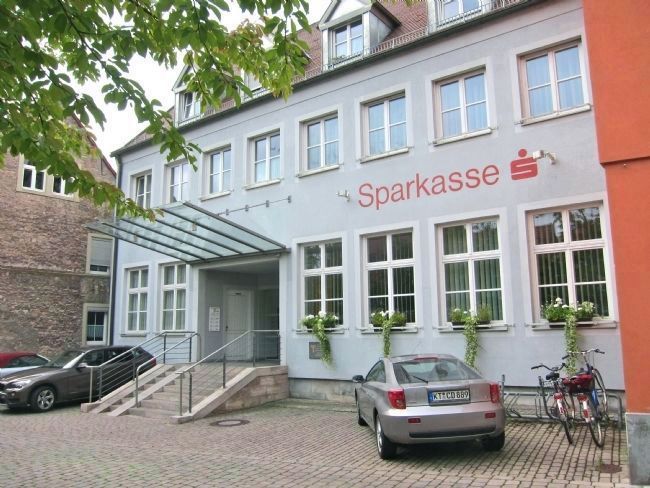 Photographed By Andrew Ruppenstein, August 29, 2014
2. The Former Dettelbach Synagogue - Wide View
Built in 1862, the synagogue included 2 classrooms, a community hall, and a mikvah. In the violence of Kristalnacht (November 9-10, 1938), only the Torah curtain was burned. The last 11 Jewish inhabitants of Dettelbach, all elderly, were deported to the Theresienstadt ghetto in September, 1942. The site is now occupied by a savings bank. The marker is visible just to the right of the entrance, below the window.