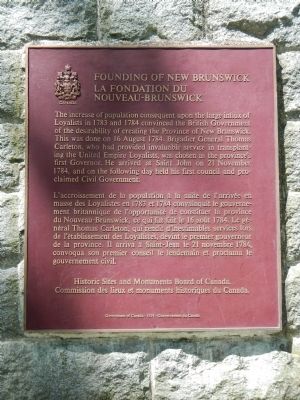 English
The increase of population consequent upon the large influx of Loyalists in 1783 and 1784 convinced the British government of the desirability of creating the Province of New Brunswick. This was done on 16 August 1784. Brigadier General Thomas Carleton, who had provided invaluable service in transplanting the United Empire Loyalists, was chosen as the province’s first governor. He arrived at Saint John on 21 November 1784, and on the following day held his first council and proclaimed Civil Government.

Erected by Historic Sites and Monument Board of Canada/Commission 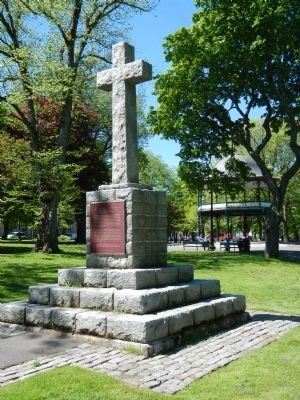 Topics and series. This historical marker is listed in this topic list: Settlements & Settlers. In addition, it is included in the Canada, Historic Sites and Monuments Board series list.

Also see . . .  New Brunswick - Wikipedia. Nova Scotia was therefore partitioned. In 1784, Britain split the colony of Nova Scotia into three separate colonies: New Brunswick, Cape Breton Island, and present-day peninsular Nova Scotia, in addition to the adjacent colonies of St. John's Island (renamed Prince Edward Island in 1798) and Newfoundland. The Colony of New Brunswick was created on August 16, 1784; Sir Thomas Carleton was appointed as Lieutenant-Governor in 1784, and in 1785 a new assembly was established with the first elections. The new colony was almost called New Ireland after a failed attempt to establish a colony of that name in Maine during the war. (Submitted on September 28, 2014, by Barry Swackhamer of Brentwood, California.)
Credits. This page was last revised on June 16, 2016. It was originally submitted on September 27, 2014, by Barry Swackhamer of Brentwood, California. This page has been viewed 291 times since then and 7 times this year. Photos:   1, 2. submitted on September 28, 2014, by Barry Swackhamer of Brentwood, California. • Andrew Ruppenstein was the editor who published this page.
Share This Page.