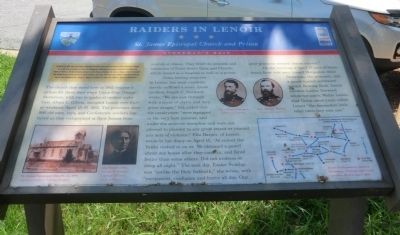 (preface)
On March 24, 1865, Union Gen. George Stoneman led 6,000 cavalrymen from Tennessee into southwestern Virginia and western North Carolina to disrupt the Confederate supply line by destroying sections of the Virginia and Tennessee Railroad, the North Carolina Railroad, and the Piedmont Railroad. He struck at Boone on March 28, headed into Virginia on April 2, and returned to North Carolina a week later. Stoneman’s Raid ended at Asheville on April 26, the day that Confederate Gen. Joseph E. Johnson surrendered to Union Gen. William T. Sherman near Durham.

(main text)
The church that stood here in 1865 became a prison for three days when Union Gen. George Stoneman, with two brigades of raiders under Gen. Alvan C. Gillem, occupied Lenoir over Easter weekend, April 15-17, 1865. The prisoners were 900 old men, boys and Confederate soldiers captured as they recuperated at their homes from wounds or illness. They filled the grounds and sanctuary of Saint James Episcopal Church, which served as a hospital as well as a prison.

Click or scan to see
this page online
Local resident Joseph C. Norwood wrote, “We are just through with a scene of alarm and very great danger,” but added that the cavalrymen “were equipped in the very best manner, and under the severest discipline and were not allowed to plunder to any great extent or commit any acts of violence.” Ella Harper, of Lenoir, wrote in her diary on April 15, “At sunset the Yanks rushed in on us. We obtained a guard about our house after they came in, and fared better than some others. Did not undress or sleep all night.” The next day, Easter Sunday, was “unlike the Holy Sabbath,” she wrote, with “excitement, confusion and hurry all day. Our poor prisoners seemed almost starved.”

On the morning of April 17, part of Stoneman’s force rode west toward Morganton while Stoneman, the prisoners, and a guard headed northward toward Blowing Rock. Lenoir resident Louisa Norward wrote her uncle, Walter Lenoir, that Union cavalrymen called Lenoir “the damnedest little rebel town they ever saw.” 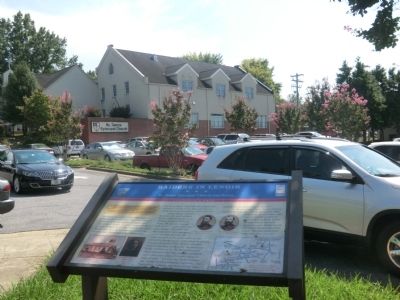 Topics and series. This historical marker is listed in these topic lists: Churches & Religion • War, US Civil. In addition, it is included in the North Carolina Civil War Trails series list. A significant historical month for this entry is March 1915.

Other nearby markers. At least 8 other markers are within 12 miles of this marker, measured as the crow flies. Davenport College (about 400 feet away, measured in a direct line); Stoneman's Raid (approx. 0.6 miles away); Fort Defiance (approx. 5.4 miles away); Patterson Mill (approx. 5.7 miles away); Collett Leventhorpe (approx. 6½ miles away); Laura Foster (approx. 10.7 miles away); Rutherford College (approx. 11.3 miles away); a different marker also named Rutherford College (approx. 11½ miles away). Touch for a list and map of all markers in Lenoir.
Credits. This page was last revised on June 16, 2016. It was originally submitted on September 29, 2014, by Don Morfe of Baltimore, Maryland. This page has been viewed 497 times since then and 19 times this year. Photos:   1, 2, 3. submitted on September 29, 2014, by Don Morfe of Baltimore, Maryland. • Bernard Fisher was the editor who published this page.
Share this page.