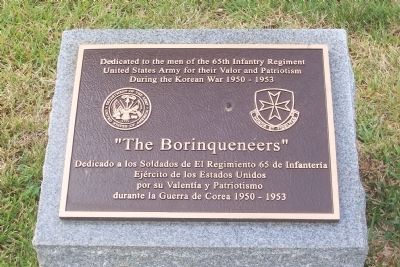 Photographed By Richard E. Miller, August 30, 2008
1. "The Borinqueneers" Marker
Inscription.
, Dedicated to the men of the 65th Infantry Regiment, United States Army, for their valor and patriotism during the Korean War, 1950 - 1953., Official seals of the Department of the Army and the 65th Infantry Regiment, . This memorial was erected in 2000 by Department of the Army. It is in Arlington in Arlington County Virginia