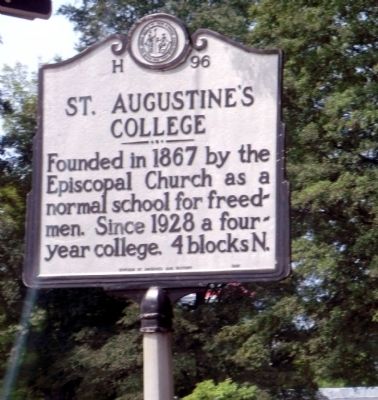 By Don Morfe, August 22, 2014
1. St. Augustine's College Marker
Inscription.
St. Augustine's College. . Founded in 1867 by the Episcopal Church as a normal school for freedmen. Since 1928 a four-year college. 4 blocks N. . This historical marker was erected in 1988 by Division of Archives and History. It is in Raleigh in Wake County North Carolina

Founded in 1867 by the Episcopal Church as a normal school for freedmen. Since 1928 a four-year college. 4 blocks N.

Erected 1988 by Division of Archives and History. (Marker Number H-96.)

Topics and series. This historical marker is listed in these topic lists: African Americans • Churches & Religion • Education. In addition, it is included in the North Carolina Division of Archives and History series list. A significant historical year for this entry is 1867.

Other nearby markers. At least 8 other markers are within walking distance of this marker. Pettigrew Hospital (about 300 feet away, measured in a direct line); First N.C. State Fair (about 400 feet away); Charles N. Hunter (about 600 feet away); North Carolina Confederate POWs (approx. 0.4 miles away); 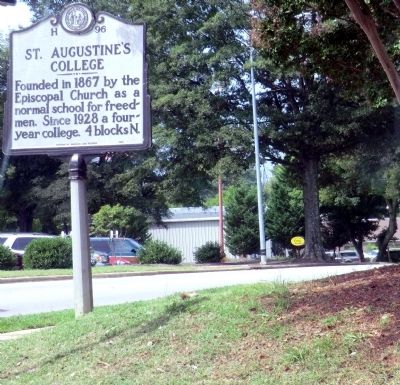