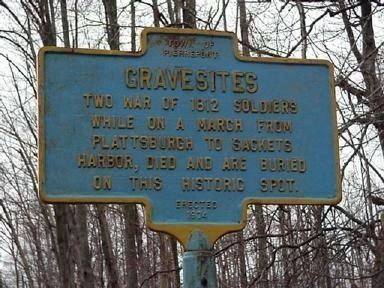 Photographed By Www.stlawrencecountycemeteries.org
1. War of 1812 Soldiers' Graves Marker
The sign has been refurbished since this picture was taken.
Inscription.
War of 18 12 Gravesites. . , Two War of 18 12 soldiers while on a march from Plattsburgh to Sackets Harbor, died and are buried on this historic spot. . This historical marker was erected in 1974 by Town of Pierrepont. It is in Pierrepont in St. Lawrence County New York

Two War of 1812 soldiers while on a march from Plattsburgh to Sackets Harbor, died and are buried on this historic spot.

Erected 1974 by Town of Pierrepont.

Topics. This historical marker is listed in this topic list: War of 1812. A significant historical year for this entry is 1812.

More about this marker. It is not a good area for parking a vehicle.

Regarding War of 1812 Gravesites. 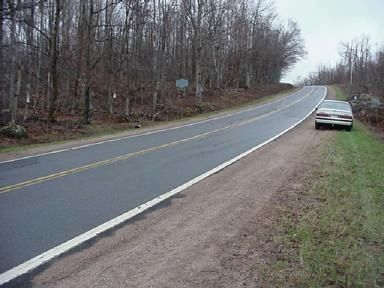 Click or scan to see
this page online
Two soldiers in War of 1812 died and were buried here. Two graves are about 20-30 feet from side of road down small but maintained path.

Additional commentary.
1. 1812 Soldiers’ Graves Will Be In Pierrepont Hands
The below is the text from the article by Deidre Kelly, originally published in the Daily Courier-Observer, Friday, on August 2, 2002. The source is linked above.

PIERREPONT--A small historical site featuring two War of 1812 soldiers’ graves along County Route 24 will now be officially deeded to the town of Pierrepont.

Town attorney Charles B. Nash told the town board a parcel of land near the site was recently surveyed and the people interested in the adjacent lot wanted to make sure it is deeded to the town.

Nash noted the land probably belonged to the town at one time, but by signing the deed, the town’s ownership would be official.

Town Supervisor William Ford signed the necessary documents to ensure the town legally owns the historic property, which is now badly overgrown with waist-high weeds and brush. The cost of filing the documents is $65. Nash 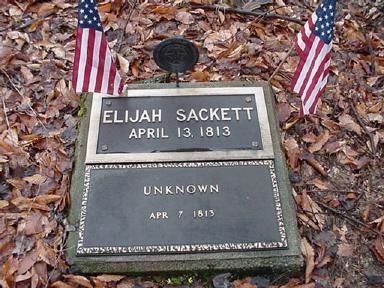 Photographed By Www.stlawrencecountycemeteries.org
3. Grave Markers for the War of 1812 soldiers buried here
Elijah Sackett April 13, 1813
Unknown April 7, 1813
said it was basically a matter of cleaning up the ownership issue.

The town will now be responsible for taking care of the 0.95 acre plot near the telephone tower base, which will initially entail clearing out brush and making paths. Once the preliminary work is done, the upkeep will consist of keeping the site mowed.

The graves are located near the back of the property, about 280 feet off the road. Town Clerk Norma V. Casolara said people would probably enjoy walking back to view the graves if there were clear trails and definite grave markers. Now the only way a person can tell the graves are even located at the site is by the blue historical sign by the road.

Nash suggested a Boy Scout looking to earn his Eagle Scout badge might want to consider taking over the project. He said it would be a great way to research some local history and serve the community.

"There’s probably an interesting story behind the soldiers," Nash said.

Ford noted he had stopped at the site many times to view the graves, but had no luck finding them because he didn’t realize they were so far back.

Nash included a record map of of the grave sites with the deed so future generations would always be aware with their exact location.
— Submitted November 29, 2008, by Kevin W. of Stafford, Virginia. 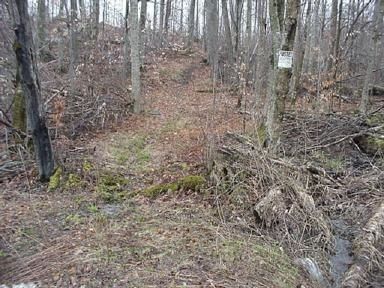 Photographed By Www.stlawrencecountycemeteries.org
4. Trail near the marker leading to the War of 1812 Gravesite.
2. RE: Elijah Sackett
This Elijah Sackett may very well be the Elijah Sackett that is referred to in the Military Minutes of the Council of Appointment, State of New York 1783-1821, Volume 4, on pages 498, 935 and 1090.

This Elijah Sackett was born 31 Jan. 1768 at Sheffield, Berkshire Massachusetts USA and Died on 7 April 1813. He was Married to Dorothy Buell. In 1800 he was with the Washington County NY Militia serving under Lt. Col. Commandant Solomen, Kings Regt., as an Ensign (Page 498). In 1807 he was promoted to Lt.