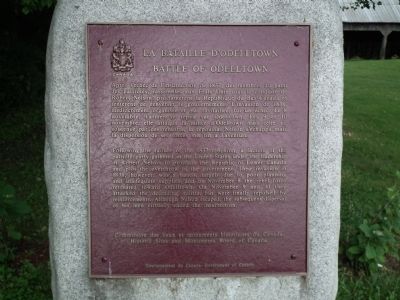 Following the failure of the 1837 rebellion, a faction of the patriote party gathered in the United States under the leadership of Robert Nelson to proclaim the Republic of Lower Canada and plot the overthrow of the government. Their invasion in 1838, however, was a fiasco, largely due to poor planning and inadequate supplies, and on November 8 the rebel force retreated toward Odelltown. On November 9 and 10 they attacked the defending militia, but were finally repulsed by reinforcements. Although Nelson escaped, the subsequent dispersal of his men virtually ended the insurrection. 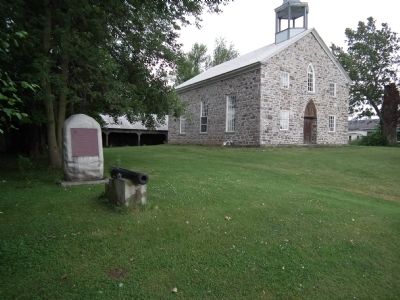 Topics and series. This historical marker is listed in this topic list: Wars, Non-US. In addition, it is included in the Canada, Historic Sites and Monuments Board series list. A significant historical month for this entry is November 1821.

Location. 45° 2.554′ N, 73° 23.21′ W. Marker is in Lacolle, Québec, in Le Haut-Richelieu. Marker is at the intersection of Québec Route 221 and Montée d'Odelltown, on the right when traveling south on Provincial Route 221. The marker is located next to the beautifully restored Odelltown Methodist chapel, which dates back to 1823. Touch for map. Marker is in this post office area: Lacolle QC J0J 1J0, Canada. Touch for directions. 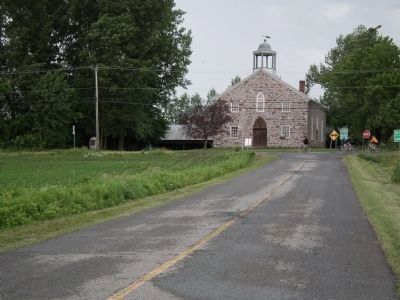