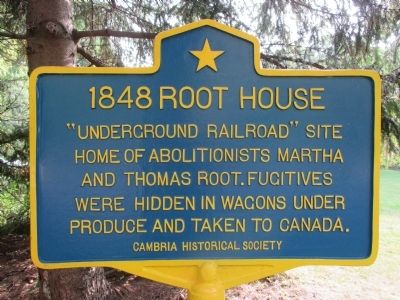 By Anton Schwarzmueller, October 1, 2014
1. 1848 Root House Marker
Inscription.
1848 Root House. .
"Underground Railroad" site Home of abolitionists Martha and Thomas Root. Fugitives were hidden in wagons under produce and taken to Canada.. . This historical marker was erected by Cambria Historical Society. It is in Cambria in Niagara County New York

"Underground Railroad" site
Home of abolitionists Martha
and Thomas Root. Fugitives
were hidden in wagons under
produce and taken to Canada.

Other nearby markers. At least 8 other markers are within 5 miles of this marker, measured as the crow flies. Soldier's Memorial (approx. ¼ mile away); DEC. 19th, 1813 (approx. 2½ miles away); Howell's Tavern (approx. 2.9 miles away); Dickersonville Cemetery 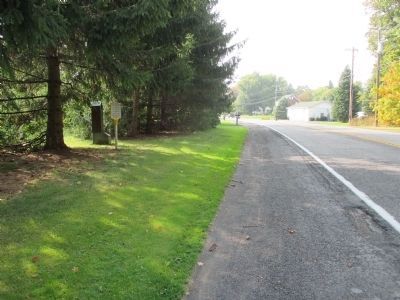 Also see . . .  The Underground Railroad in Pekin... TownofCambria.com provides a history of the Root House: ...in September, 1853, Thomas Root of Pekin along with more than 60 other Niagara County leaders called on the people of Niagara County, regardless of political party to support the nomination of those who would be in favor of repealing the fugitive slave law and in favor of “free discussion.” (Submitted on October 12, 2014.) 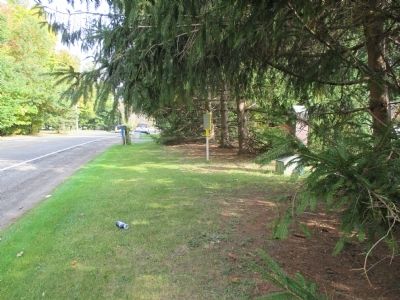 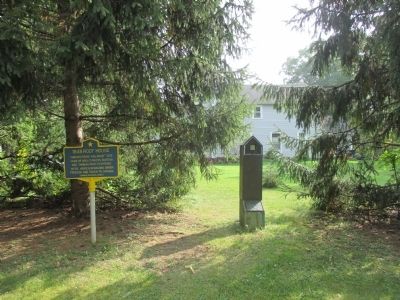 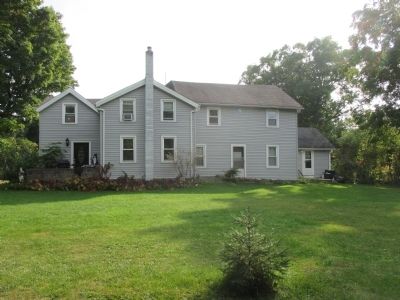 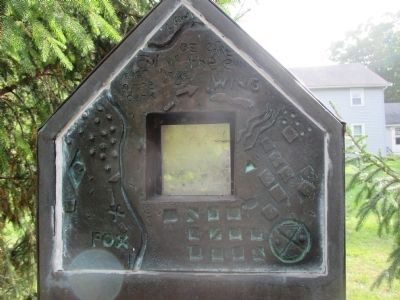 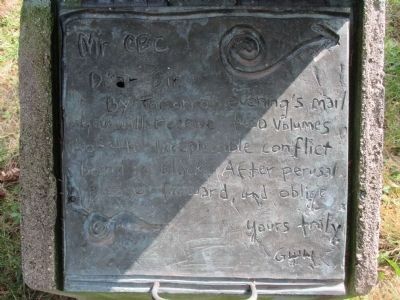 By Anton Schwarzmueller, October 1, 2014
7. 1848 Root House Cenotaph
...In 1992, the Root home, which is now owned by our very own Deputy Town Historian, Gail Reinbird and her husband Dan, received one of the Underground Railroad “stations” sculptures from the Castellani Art Museum at Niagara University as part of a public art project. The locations for the sculptures were selected because of their role in the Underground Railroad or influence on the abolitionist movement in the Niagara region. The Castellani features a permanent exhibit on the Underground Railroad and the public art project. - Townofcambria.com
Credits. This page was last revised on June 16, 2016. It was originally submitted on October 11, 2014, by Anton Schwarzmueller of Wilson, New York. This page has been viewed 605 times since then and 7 times this year. Photos:   1, 2, 3, 4, 5, 6, 7. submitted on October 11, 2014, by Anton Schwarzmueller of Wilson, New York. • Andrew Ruppenstein was the editor who published this page.
Share This Page.