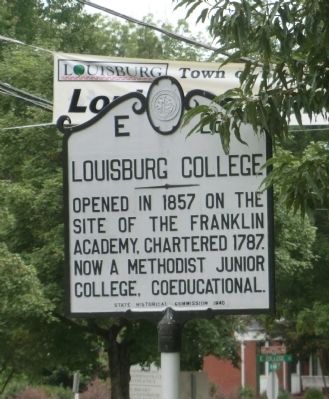 Photographed By Don Morfe, August 22, 2014
1. Louisburg College Marker
Inscription.
Louisburg College. . , Opened in 1857 on the site of the Franklin Academy, chartered 1787. Now a Methodist Junior College, coeducational. . This historical marker was erected in 1940 by State Historical Commission. It is in Louisburg in Franklin County North Carolina

Opened in 1857 on the site of the Franklin Academy, chartered 1787. Now a Methodist Junior College, coeducational.

Topics and series. This historical marker is listed in these topic lists: Churches & Religion • Education. In addition, it is included in the North Carolina Division of Archives and History series list. A significant historical year for this entry is 1857.

Other nearby markers. At least 8 other markers are within 12 miles of this marker, measured as the crow flies. Camp Site for Sherman's Army (within shouting distance of this marker); Franklin Male Academy Building (about 700 feet away, measured in a direct line); Richard Warfington (approx. half a mile away); John Williamson (approx. 0.9 miles away); 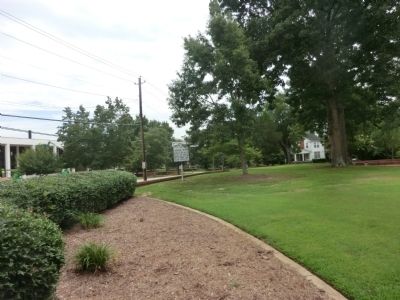