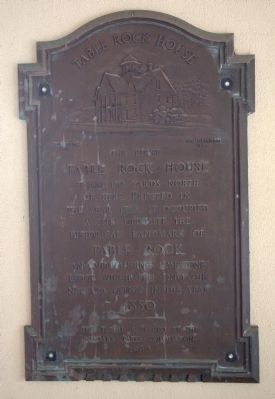 The first Table Rock House stood 150 yards north of here. Erected in the year 1853, it occupied a site opposite the historical landmark of Table Rock, an overhanging limestone ledge which fell into the Niagara Gorge in the year 1850.

Topics. This historical marker is listed in these topic lists: Natural Features • Notable Places. A significant historical year for this entry is 1853.

Location. 43° 4.77′ N, 79° 4.785′ W. Marker is in Niagara Falls, Ontario, in Niagara Region. Marker can be reached from Niagara Parkway south of Murray Street. It is in the open room under the Table Rock House entrance tower opposite the incline railway. Touch for map. Marker is in this post office area: Niagara Falls ON L2E 6T2, Canada. Touch for directions. 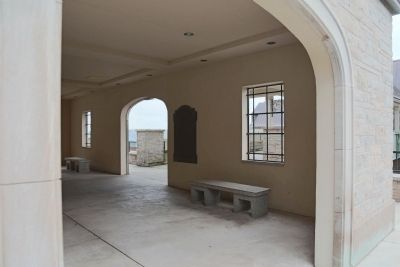 Also see . . .
1. Wikipedia Entry for Table Rock, Niagara Falls. “Table Rock was a large shelf of rock that jutted out from the Canadian shore of Niagara Falls, Ontario, just north of the present day observation and commercial complex. Revealed in the mid-18th century as the Horseshoe Falls receded, Table Rock was the first major vantage point for tourists of the early and mid-19th century.” (Submitted on October 18, 2014, by J. J. Prats of Powell, Ohio.)

2. Wikipedia entry for Table Rock Welcome Center. “Davis' Table Rock House, standing since 1853, was in disrepair and was finally demolished in 1925 to make way for a new road and replacement building. Designed by the firm of Findlay and Foulis of Sault Ste. Marie, Ontario, this building is still in service today, albeit with major modifications since that time.” (Submitted on October 18, 2014, by J. J. Prats of Powell, Ohio.) 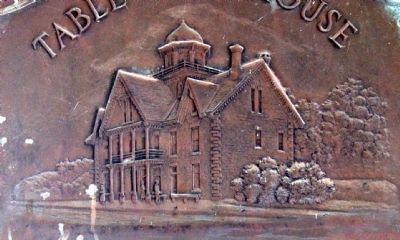 Photographed By J. J. Prats, October 16, 2014
3. Table Rock House
Close-up of bas-relief on marker.
. “The station was officially known as the Niagara Falls Depot and was the closest station to the Falls of Niagara. It later became known as the Victoria Park Station after Queen Victoria Park which was located nearby at the base of Clifton Hill.” (Submitted on October 18, 2014, by J. J. Prats of Powell, Ohio.)

Photographed By J. J. Prats, October 16, 2014
4. The Table Rock Welcome Center, the Replacement for Table Rock House
This view is from the incline railway car at the top of the incline. The marker is in the open-air lower level of the tower-house you see in the foreground. It leads to a bridge over Niagara Parkway and into the second level of Table Rock Welcome Center. Inside you will find two attractions: Journey Behind the Falls, where you an walk to observation decks at the foot of the Falls and through tunnels far behind the Falls; and Niagara’s Fury, a “4-D experience” about the creation of the Falls. Also there are plenty of shops, and restaurants and snack bars. Walk through the Welcome Center to the promenade along the river and gorge.

Photographed By J. J. Prats, October 16, 2014
5. Table Rock Marker Inside Table Rock House, Lower Level Next to Tim Hortons
Being indoors, this marker does not qualify for its own page on the Historical Marker Database. It reads:

“You are visiting a site referred to as TABLE ROCK because of the flat rock overhang which was formed here. Continued erosion, however, caused it to fall into the water in 1850.

“Millions of visitors have travelled to this area since the early nineteenth century. Until 1885, this property was in private ownership, high fences restricted the view of the Falls, makeshift buildings scarred the area and visitors were often charged a fee for close-up viewing of the Falls.

“The Niagara Parks Commission was formed by the Government of Ontario in 1885 to preserve and enhance the natural beauty of the Falls for the enjoyment of visitors while generating sufficient income to be self-supporting. One of its first steps was to acquire this property. Substantial renovation has occurred at this site over the years to meet the needs of increasing numbers of visitors, most recently in 1990-91.” 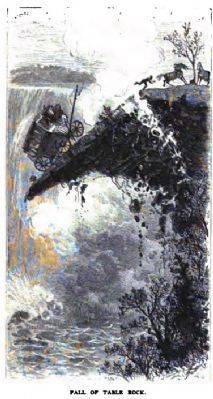