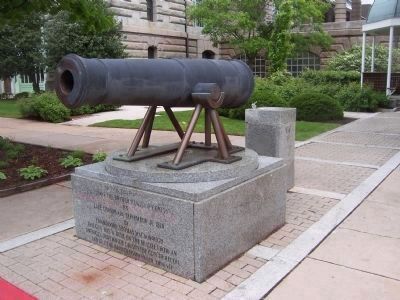 By Richard E. Miller, May 10, 2008
1. British 24 Pounder Marker
This is a "trophy cannon," taken after the U.S. Navy's pivotal victory at the Battle of Lake Champlain (a.k.a. "The Battle of Plattsburg").
Inscription.
British 24 Pounder. . Captured on the British flagship Confiance on Lake Champlain, September 11, 1814, by Commodore Thomas MacDonough. . . This gun has a dent on the muzzle from an American shot which caused the gun to recoil and kill the British commander, Downie. . This historical marker was erected by U.S. Navy. It is in Annapolis in Anne Arundel County Maryland

This gun has a dent on the muzzle from an American shot which caused the gun to recoil and kill the British commander, Downie.

Topics. This historical marker is listed in these topic lists: Heroes • War of 1812 • Waterways & Vessels.

Location. 38° 58.966′ N, 76° 28.948′ W. Marker is in Annapolis, Maryland, in Anne Arundel County. Marker can be reached from Holloway Road. Marker is located on the grounds of the United States Naval Academy. A picture ID is required to enter the Academy grounds. Touch for map. Marker is at or near this postal address: 101 Wilson Road, Annapolis MD 21402, United States of America. Touch for directions.

Other nearby markers. At least 8 other markers are within walking distance of this marker. HMS Confiance Cannon (here, next to this marker); Japanese Ambassador Hirosi Saito (about 300 feet away, measured in a direct line); Burning of the Brig "Peggy Stewart" (about 400 feet away); Butler in Annapolis 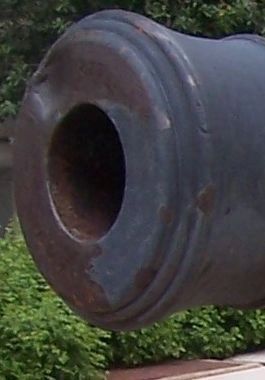 More about this marker. The marker's inscriptions are chiseled into the granite mount beneath the cannon which is on the east curb of the parking lot, near the Midshipman's Store, and just west of MacDonough Hall.

Regarding British 24 Pounder. Captain George Downie commanded the British fleet which attacked the American fleet anchored in Lake Champlain in the Battle of Plattsburgh. Downie led inexperienced crews on untested ships into a battle where the winds were not in his favor. Downie's crew, many of them from provincial units, faced American forces with more preparation time and more favorable positioning.

Fifteen minutes into the battle, Captain Downie was sighting a gun when the muzzle was struck with a shot from Saratoga. The force of the blow was so extreme that it ripped the 2,000-pound barrel out of the carriage, flipped it up on end and crushed Downie to the deck, killing him.

After several of the other officers had also been killed or injured, Confiance's fire become steadily less effective. MacDonough, aboard the USS Saratoga, skillfully maneuvered 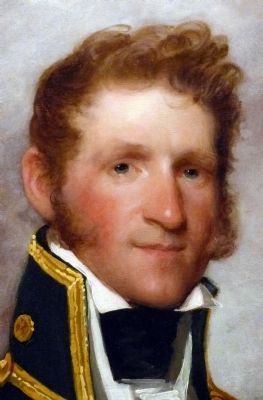 By Allen C. Browne, December 31, 2014
3. Commodore Thomas MacDonough
Detail of 1815/18 portrait by Gilbert Stuart in the National Gallery of Art Washington, DC.
to gain the advantage, wrecking incredible carnage on the HMS Confiance and HMS Linnet, forcing their remaining officers to surrender what remained of their vessels and crew.

Just over two and one half hours after the first gun had been fired, not one of the larger vessels had a mast that would bear a sail, and those vessels captured from the British were barely afloat.

Also see . . .
1. A Signal Victory on Lake Champlain, The Battle of Plattsburg. "Seldom has the ocean witnessed a more furious encounter than now took place on the bosom of this transparent and peaceful lake."
- Theodore Roosevelt, from his book, The Naval War of 1812; or the history of the United States navy during the last war with Great Britain. (Submitted on May 19, 2008, by Kevin W. of Stafford, Virginia.)