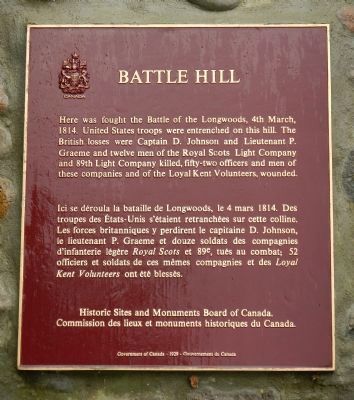 English
Here was fought the Battle of Longwoods, 4th March, 1814. United States troops were entrenched on this hill. The British losses were Captain D. Johnson and Lieutenant P. Graeme and twelve men of the Royal Scots Light Company and the 89th Light Company, fifty-two officiers and men of these companies of these companies and of the Loyal Kent Volunteers, wounded.

Topics. This historical marker is listed in this topic list: War of 1812. A significant historical date for this entry is March 4, 1814. 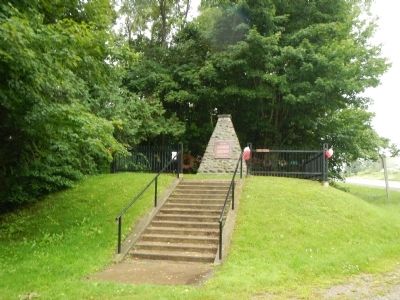 Click or scan to see
this page online
42.343′ W. Marker is near Glencoe, Ontario, in Middlesex County. Marker is on Longwoods Road (Provincial Highway 2) close to Pratt Siding Road, on the right when traveling east. Touch for map. Marker is at or near this postal address: 3219 Longwoods Road, Glencoe ON N0L, Canada. Touch for directions.