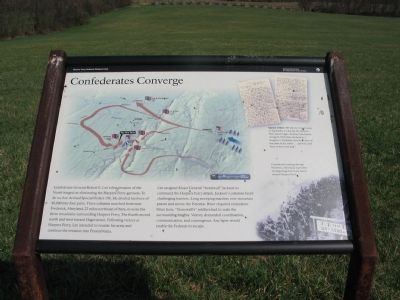 Confederate General Robert E. Lee's first invasion of the North hinged on eliminating the Harpers Ferry garrison. To do so Lee devised Special Orders 191. He divided his force of 40,000 into four parts. Three columns marched from near Frederick, Maryland, 22 miles northeast of here, to seize the three mountains surrounding Harpers Ferry. The fourth moved north and west toward Hagerstown. Following victory at Harpers Ferry, Lee intended to reunite his army and continue the invasion into Pennsylvania. 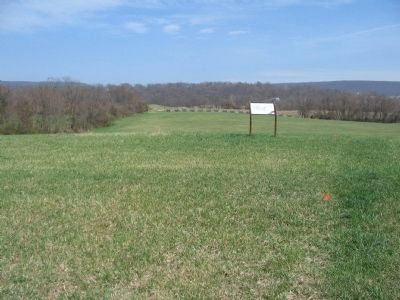 Photographed By Craig Swain, April 5, 2008
2. The Confederates Converge Wayside
In the background is Bolivar Heights, and the Federal positions held during the battle.

Click or scan to see
this page online
39° 19.302′ N, 77° 46.653′ W. Marker is near Bolivar, West Virginia, in Jefferson County. Marker can be reached from Bakerton Road (County Road 27), on the right when traveling south. Located in the north section of the School House Ridge unit of the Harpers Ferry National Historic Park. The marker is along a walking trail just north of the William L. Wilson Freeway (US 340). The trail is best reached from the parking area on Bakerton Road (CR 27). Touch for map. Marker is in this post office area: Harpers Ferry WV 25425, United States of America. Touch for directions.

More about this marker. On the left center of the marker is a map illustrating the movements of the Confederate columns described in the text. On the right is a reproduction describing Special Orders 191 fell into Union hands on September 13, the day the Harpers Ferry attack began. Federal Commander George B. McClellan declared in a telegram to President Lincoln, "I have all the plans of the rebels ... and will catch them in their own trap." On the lower right is a portion of a photograph of Confederates passing through Frederick, Maryland, September 10, beginning their 3-day march toward Harpers Ferry. 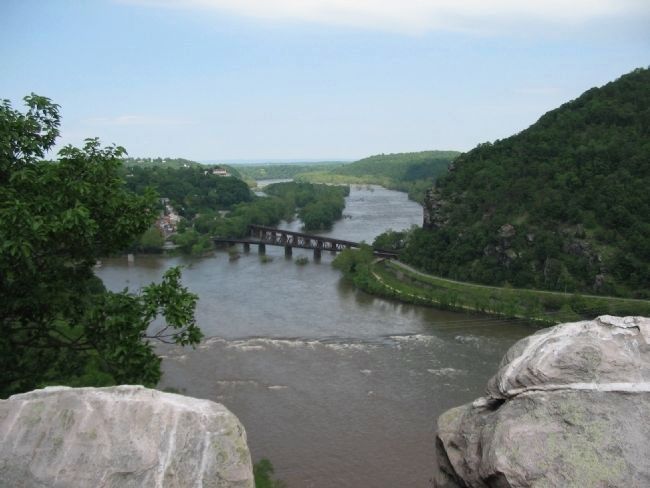