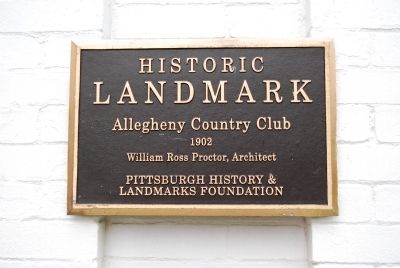 Topics. This historical marker is listed in these topic lists: Architecture • Parks & Recreational Areas. A significant historical year for this entry is 1902.

Location. 40° 33.488′ N, 80° 9.862′ W. Marker is near Sewickley Heights, Pennsylvania, in Allegheny County. Marker can be reached from the intersection of Country Club Road and Quaker Hollow Road. Marker is mounted to the column at the entrance to the country club. Touch for map. Marker is in this post office area: Sewickley PA 15143, United States of America. Touch for directions. 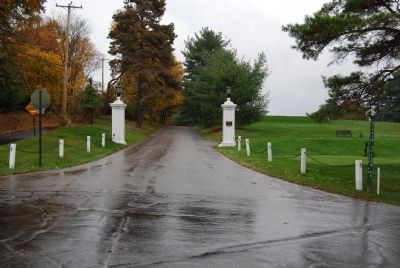 A winding mile above the town of Sewickley, the first 18-hole golf course in Western Pennsylvania can be found. The site, of course, is Allegheny Country Club, a turn-of-the-century collection of rambling buildings dedicated to the leisure and pursuit of various sports.

Overlooking the golf course and tennis courts sits a sparkling white grand old dowager queen accented with touches of green known as the Clubhouse. After World War I, Allegheny became the scene for several golf and tennis tournaments, such as the international Davis Cup Matches and the U.S. Women's Amateur Golf Tournament in the fifties. In 1990, the U.S. Women's Mid-Am Championship was held at Allegheny as was the 40th USGA Senior Women's Amateur Championship in 2001

Allegheny Country Club had its origin in 1895, but not at its present location. At California and Brighton Avenues on Pittsburgh's North Side, the first site of the club, a 6-hole golf course as well as tennis courts and a clubhouse were constructed. The Club proved so popular, however, 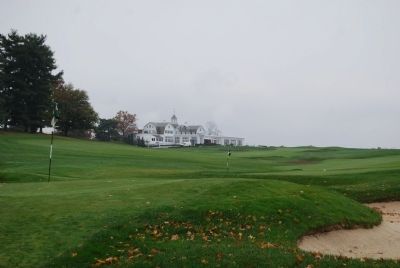 A new 150 acre site off Blackburn Road, then known as the Dairy Farm or McKean Tract, was purchased. The land was cleared and the clubhouse, designed by William Ross Proctor, was erected. A golf course, tennis courts, and a road were constructed and the property generally improved. In May 1902, the New Allegheny Country Club opened.

The golf course has changed quite a bit since it was designed by Donald Ross, the famous golf course architect. According to reliable information, there are thirty-two abandoned greens on the property. In 1945 the first seven holes of the back nine were completely remodeled. Presently, an exciting master plan for the golf course, developed by talented golf course architect, Gil Hanse, is well-underway. The plan is dedicated to restoring Donald Ross' classic design.

Over the years, many changes have been made to Allegheny Country Club. In the 1930s the Indoor Tennis Building was erected and is one of the few remaining of its kind in the country as most facilities have been replaced with the popular indoor ?bubbles?. In the 1950s a swimming pool complex was constructed and was recently remodeled and expanded.

Over the past several years, the Club developed a Long-Range Plan and many improvements and additions have been made. A new casual dining room and bar , renovations and an expansion of the Men?s Locker Room, the addition of four new paddle courts and a state-of-the-art warming hut, a Golf Learning Center and practice facility, and expanded ballroom terrace have all been added.