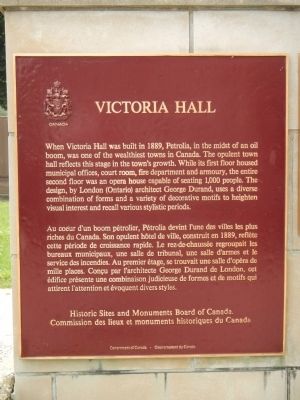 English
When Victoria Hall was built in 1889, Petrolia, in the midst of an oil boom, was one of the wealthiest towns in Canada. The opulent town hall reflects this stage in the town’s growth. While its first floor housed municipal offices, court rooms, fire department and armory, the entire second floor was an opera house capable of seating 1,000 people. The design, by London (Ontario) architect George Durand, uses a diverse combination of forms and a variety of decorative motifs to heighten visual interest and recall various stylistic periods. 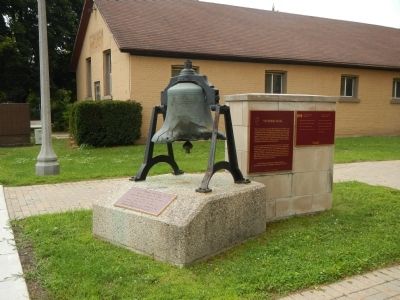 Photographed By Barry Swackhamer, August 12, 2014
2. Victoria Hall Marker
The plaque in front of the bell reads:

As part of Victoria Hall design for the Town of Petrolia in 1889, this bell served our area for over 100 years. During the fire of January 25th 1989 it fell from the tower. It sits here as a tribute to the vibrant spirit of this community.

Topics and series. This historical marker is listed in these topic lists: Arts, Letters, Music • Notable Buildings. In addition, it is included in the Canada, Historic Sites and Monuments Board series list. A significant historical year for this entry is 1889.

Other nearby markers. At least 3 other markers are within 13 kilometers of this marker, measured as the crow flies. The Founding of Petrolia (within shouting distance of this marker); Robert M. Nicol Library (about 120 meters away, measured in a direct line); First Oil Wells in Canada (approx. 12.2 kilometers away).

Also see . . .  Victoria Hall - Petrolia, Canada's Victorian Oil Town. While Victoria Hall is important architecturally on both a regional and national scale, its designation as a national historic site was made for reasons other than the merits of its architectural style. Victoria Hall represents the culmination of three decades of achievement in Canada’s early industrial development. (Submitted on October 31, 2014, by Barry Swackhamer of Brentwood, California.) 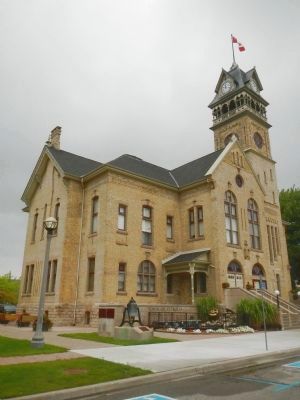 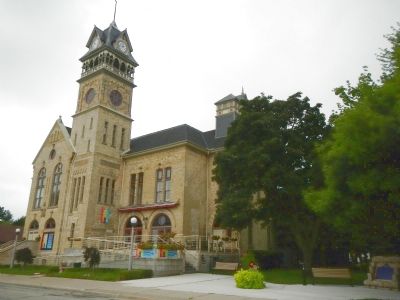