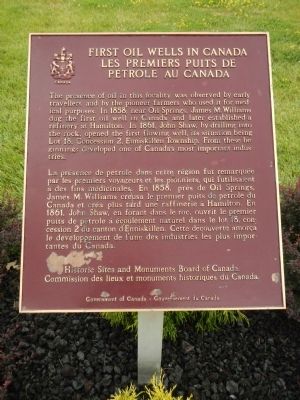 English
The presence of oil in this locality was observed by early travelers and by the pioneer farmers who used it for medical purposes. In 1858, near Oil Springs, James M. Williams dug the first oil well in Canada and later established a refinery at Hamilton. In 1861, John Shaw, by drilling into rock, opened the first flowing well, its situation being Lot 18, Concession 2, Enniskillen Township. From these beginnings developed one of Canada’s most important industries. 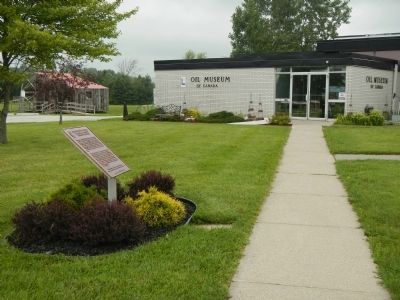 Photographed By Barry Swackhamer, August 12, 2014
2. First Oil Wells in Canada Marker
The Oil Museum of Canada is in the background.

Topics and series. This historical marker is listed in this topic list: Industry & Commerce. In addition, it is included in the Canada, Historic Sites and Monuments Board series list. A significant historical year for this entry is 1858.

Location. 42° 46.382′ N, 82° 7.25′ W. Marker is in Oil Springs, Ontario, in Lambton County. Marker can be reached from Kelly Road close to Gum Bed Line, on the left when traveling south. Touch for map. Marker is at or near this postal address: 2423 Kelly Road, Oil Springs ON N0N, Canada. Touch for directions.

More about this marker. This marker is located on the grounds of the Oil Museum of Canada. 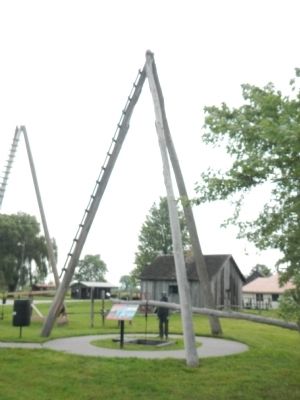 Photographed By Barry Swackhamer, August 12, 2014
3. A Three-pole, spring-board oil derrick
James Miller Williams set out to dig a water well in 1858 and found free oil instead. (Submitted on October 31, 2014, by Barry Swackhamer of Brentwood, California.) 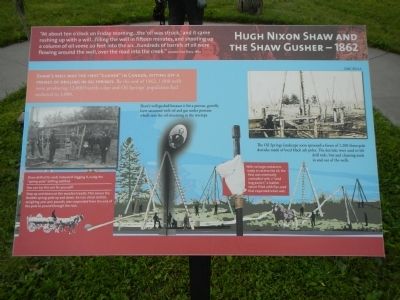 Photographed By Barry Swackhamer, August 12, 2014
4. Hugh Nixon Shaw and the Shaw Gusher - 1862
“At about ten o’clock on Friday morning… the ‘oil was struck,’ and it came rushing up with a will … filling the well in fifteen minutes, and shooting up a column of oil some 20 feet into the air… hundreds of barrels of oil were flowing around the well, over the road and into the creek.” - London Free Press, 1862

Captions: (left to right) Shaw drilled his well, instead of digging it, using the “spring-pole: drilling method. — You can try this out for yourself — Step up and down on the wooden treadle. This moves the flexible spring-pole up and down. An iron chisel drill bit, weighing 300-400 pounds, was suspended from the end of the pole to pound through the rock.; Shaw’s well gushed because it hit a porous, gravelly layer saturated with oil and gas under pressure which sent the oil streaming to the treetops.; With no large containers ready to receive the oil, the flow was eventually controlled with a “seed bag packer,” a leather sleeve filled with flax seed that expanded when wet.; The Oil Springs landscape soon sprouted a forest of 1,200 three-pole derricks made of local black ash poles. The derricks were used to lift drill rods, bits and cleaning tools in and out of the wells. 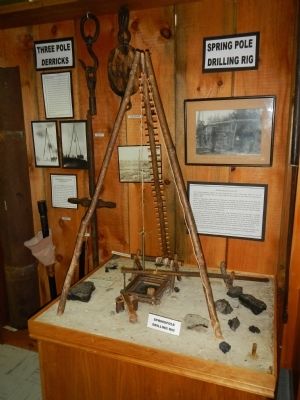 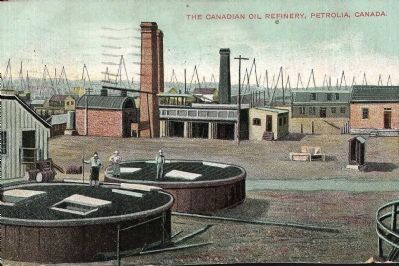 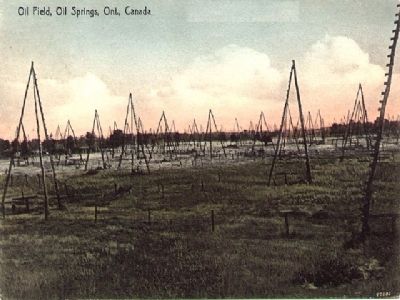