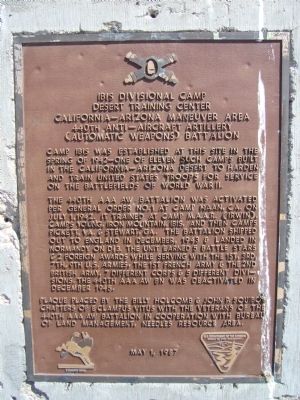 By Bill Kirchner, March 14, 2010
1. Ibis Divisional Camp Marker
Inscription.
Ibis Divisional Camp - Desert Training Center. California – Arizona Maneuver Area. Camp Ibis was established at this site in the spring of 1942 – one of eleven such camps built in the California – Arizona Desert to harden and train United States Troops for service on the battlefields of World War II., The 440th AAA AW Battalion was activated per General Order No. 1 at Camp Haan, CA, on July 1, 1942. It trained at Camp M.S.S.R. (Irwin), Camps Young, Iron Mountain, Ibis, and then Camps Pickett, VA. and Stewart, GA. The battalion shipped out to England in December, 1943 and landed in Normandy on D+3. The unit earned 5 battle stars and 2 Foreign Awards while serving with the 1st, 3rd, 7th, 9th U.S. Armies, the 1st French Army and the 2nd British Army, 7 different corps and 5 different divisions. The 440th AAA AW BN was deactivated in December 1945. . This historical marker was erected in 1987 by Billy Holcomb and John P. Squibob Chapters of E Clampus Vitus with the Veterans of the 440th AAA AW Battalion in Cooperation with Bureau of Land Management, Needles Resource Area.. It is Near Needles in San Bernardino County California

Camp Ibis was established at this site in the spring of 1942 – one of eleven such camps built in the California – Arizona Desert to harden and train United States Troops for service on the battlefields of World War II.

Topics and series. This historical marker is listed in these topic lists: Military 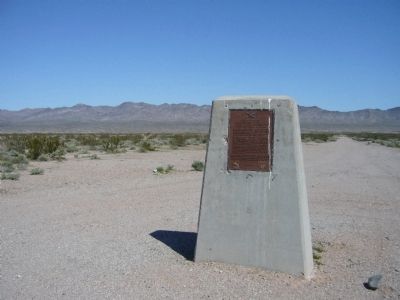 Click or scan to see
this page online
• War, World II. In addition, it is included in the Desert Training Center, and the E Clampus Vitus series lists. A significant historical month for this entry is July 1922.

More about this marker. Camp Ibis was located on both sides of what is now US 95 and was over two miles long. East of the highway are the best preserved evidence of the camp's roads, rock alignments and rock designs left by various units who trained here.
SOURCE: Billy Holcomb Chapter 1069 35th Anniversary Plaque Book by Phillip Holdaway 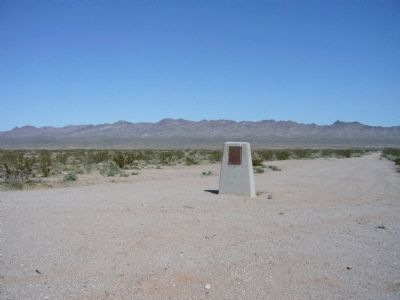 By Bill Kirchner, March 14, 2010
3. Ibis Divisional Camp Marker
Click here for a list of markers that are related to this marker. Additional markers detailing the Desert Maneuver Center where mapping the markers shows the scope and scale of the training area.
Credits. This page was last revised on June 16, 2016. It was originally submitted on March 28, 2010, by Bill Kirchner of Tucson, Arizona. This page has been viewed 1,801 times since then and 51 times this year. Last updated on November 3, 2014, by Michael Kindig of Long Beach, California. Photos:   1, 2, 3. submitted on March 28, 2010, by Bill Kirchner of Tucson, Arizona. • Bill Pfingsten was the editor who published this page.
Share this page.