Site of the First Permanent Seat of Justice in Pike County 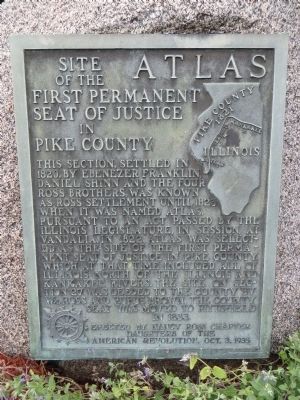 This section, settled in 1820, by Ebenezer Franklin, Daniel Shinn and the four Ross brothers, was known as Ross Settlement until 1823 when it was named Atlas. Pursuant to an act passed by the Illinois Legislature, in session, at Vandalia, in 1822, Atlas was selected as the site of the first permanent seat of justice in Pike County, which at the time included all of Illinois North of the Illinois and Kankakee Rivers. The site on section 27 was deeded to the county by Wm. Ross and Rufus Brown. The county seat was moved to Pittsfield in 1833.

Erected 1935 by Nancy Ross Chapter, Daughters of the American Revolution.

Topics and series. This historical marker is listed in this topic list: Settlements & Settlers. In addition, it is included in the Daughters of the American Revolution (DAR) series list. A significant historical year for this entry is 1820. 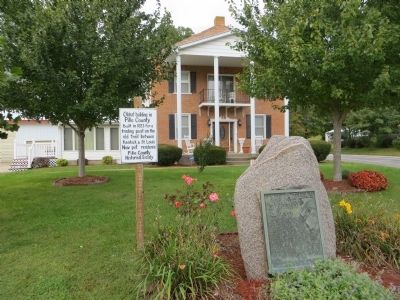 Click or scan to see
this page online
corner. Touch for map. Marker is in this post office area: Rockport IL 62370, United States of America. Touch for directions.

Additional commentary.
1. Colonel William Ross
William Ross also built the first brick home in Pike County, right across the street from this building. It was a grand two-story farmhouse (borderline mansion) but was torn down in the 1980s.

He had such great hopes in Atlas that he argued with John Wood, who was building up Quincy at the same time Ross was building up Atlas, that he felt sorry for Quincy due to its close proximity to the soon-to-be great city of Atlas. Sadly, Atlas is now a small village while Quincy is a successful city.

Despite Ross’s faith in Atlas, he loaned the money needed to buy the land desired for the 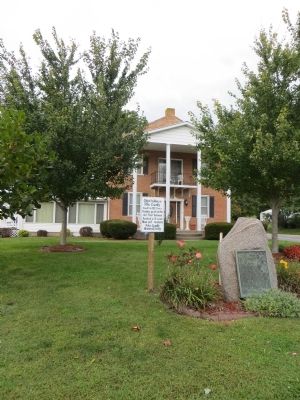 Photographed By Bill Kirchner, October 3, 2014
3. Atlas Marker
new centrally located county seat of Pittsfield. In Pittsfield, he built the first home. This was a two-story Greek Revival house about one block away from the main square, and was also torn down in the 1980s. Later on, he built his grandest home yet, and one of the grandest homes in Pike County, on the eastern outskirts of Pittsfield. President Lincoln visited this home in 1858. It was nearly destroyed by fire in the 1890s but was rebuilt in the Folk Victorian style and still stands. Note To Editor only visible by Contributor and editor
— Submitted July 26, 2019, by Emily Pursley of Pittsfield, Illinois.
Credits. This page was last revised on August 5, 2019. It was originally submitted on November 5, 2014, by Bill Kirchner of Tucson, Arizona. This page has been viewed 602 times since then and 74 times this year. Photos:   1, 2, 3. submitted on November 5, 2014, by Bill Kirchner of Tucson, Arizona. • Al Wolf was the editor who published this page.
Share this page.