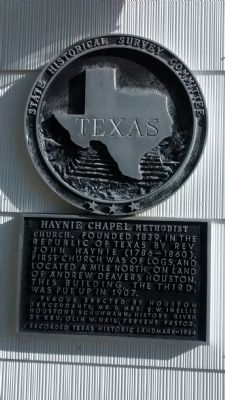 Other nearby markers. At least 8 other markers are within 6 miles of this marker, measured as the crow flies. Webberville Ebenezer Baptist Church 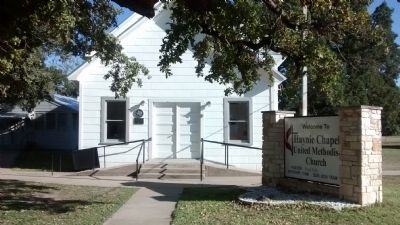 More about this marker. The church is located in Garfield, Texas. According to the Handbook of Texas Online, the post office was closed in 1902, and mail directed to Del Valle, hence the church's address.

Also see . . .  Garfield, Texas. Handbook of Texas Online article about Garfield where the church is located. (Submitted on November 20, 2014, by Richard Denney of Austin, Texas.)

Additional comments.
1. Town of Comanche, Travis County
This general area where the church is located dates back to the Mexican period in Texas. In 1830 John Caldwell settled on a large grant of land that was made to Jose Antonio Navarro in 1833 by the Mexican Government. According to "History of Travis County and Austin, 1839-1899", the original church was on this land owned by John Caldwell. As Garfield was not formed until 1880, the original log cabin church referenced on the marker was probably associated with the earlier town of Comanche, 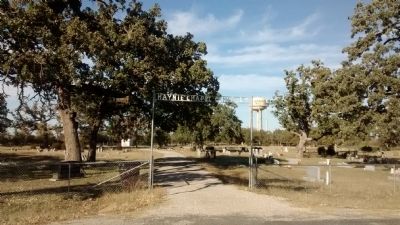 By Richard Denney, November 19, 2014
3. Haynie Chapel Cemetery
Haynie Chapel Cemetery is across the street from the church. Garfield, Texas water tower visible in background.
Travis County, north of here (not to be confused with the town of Comanche in Comanche County). Comanche was incorporated in 1839, the same year the church was founded. The town of Comanche was a competitor for the site of the Capital of Texas. The town of Waterloo – about 10 miles northeast -- won out, and was renamed to Austin, which of course is to this day the capital of Texas. One visible remnant of Comanche is the Comanche Cemetery located on Caldwell Lane (lat/long 30.204972,-97.545492). See U.S. Geological Survey, Webberville Quadrangle, 7.5 Minute Series, US Department of the Interior, 1968
— Submitted November 21, 2014, by Richard Denney of Austin, Texas.
Credits. This page was last revised on October 7, 2016. It was originally submitted on November 20, 2014, by Richard Denney of Austin, Texas. This page has been viewed 459 times since then and 25 times this year. Photos:   1, 2, 3. submitted on November 20, 2014, by Richard Denney of Austin, Texas. • Bernard Fisher was the editor who published this page.
Share This Page.