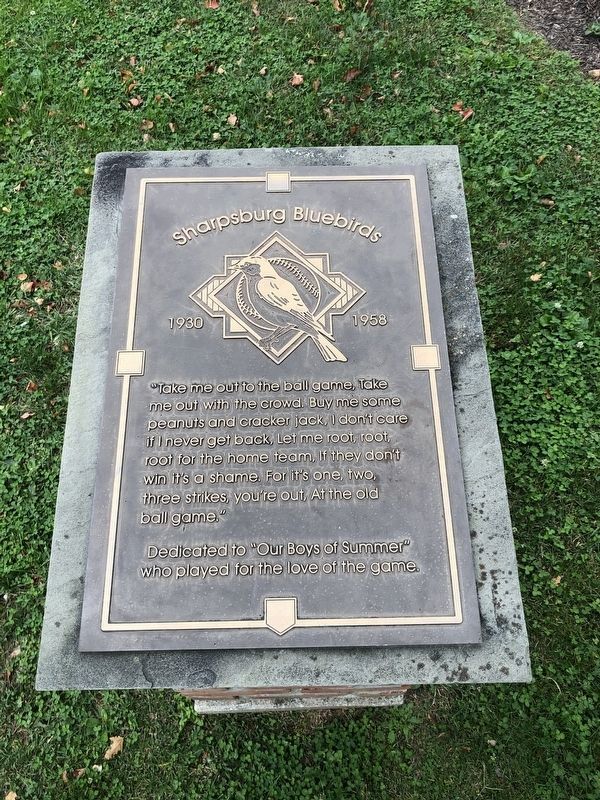 Photographed By Devry Becker Jones, October 11, 2020
1. Sharpsburg Bluebirds Marker
Inscription.
Sharpsburg Bluebirds. "Take me out to the ball game, Take me out with the crowd. Buy me some peanuts and cracker jack, I don't care if I never get back. Let me root, root, root for the home team, If they don't win it's a shame. For it's one, two, three strikes, you're out, At the old ball game.", Dedicated to "Our Boys of Summer" who played for the love of the game. . This historical marker was erected in 2002. It is in Sharpsburg in Washington County Maryland

"Take me out to the ball game, Take me out with the crowd. Buy me some peanuts and cracker jack, I don't care if I never get back. Let me root, root, root for the home team, If they don't win it's a shame. For it's one, two, three strikes, you're out, At the old ball game."

Dedicated to "Our Boys of Summer" who played for the love of the game.

Location. 39° 27.491′ N, 77° 44.911′ W. Marker is in Sharpsburg, Maryland, in Washington County. Marker is at the intersection of Main Street (Maryland Route 34) and Mechanic Street, on the right when traveling east on Main Street. Touch for map. Marker is in this post office area: Sharpsburg MD 21782, United States of America. Touch for directions. 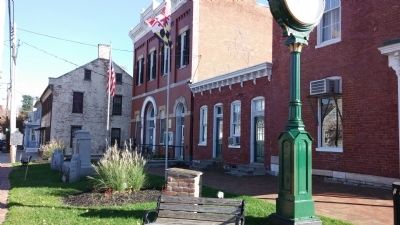 Regarding Sharpsburg Bluebirds. The below article was published in the Hagerstown Herald-Mail on Jun 16, 2002.

It was satisfying to beat Williamsport, Antietam, Dargan or the Hagerstown teams.
But a win over Boonsboro? For the Sharpsburg Bluebirds, nothing compared.
The Bluebirds and the Boonsboro Yellowjackets waged a fierce rivalry when both baseball teams were in the Washington County League.
Memories from those days surfaced during a tribute to Bluebirds baseball Saturday afternoon in Sharpsburg's Town Square.
Baseball has been around in many forms in Washington County over the years, but the semipro Bluebirds only lived from about 1930 to 1958.
Gloria French, who had several relatives play for the Bluebirds, 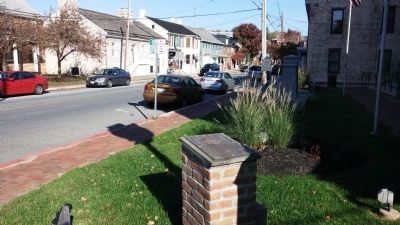 Photographed By F. Robby, November 10, 2014
3. Sharpsburg Bluebirds Marker
View East along Main Street, from the marker.
thought up the tribute a year ago. She wanted to preserve a wooden bench in the square, where players regularly sat before games.
"The first thing Sunday morning, they'd put their uniforms on and they'd talk ... and they'd be cussing and chewing tobacco," French, 78, said during an interview Friday. "They'd stay there until it was game time."
French has a 1930s team photo that includes her uncle George "Cocky" Brashears, her cousin Marlin "Petey" Brashears, her uncle Kenneth "Kak" Brashears and her father George "Skunk" French.

French, Jan Wetterer, Anna Jamison and Maxine Campbell set out to reunite the players and put a plaque in the square, not far from the bench, to remind people of the place baseball has in many Sharpsburg hearts.
Saturday, about a dozen players - mostly Bluebirds, but a few foes, too - gathered to unveil the plaque, which reads: "Dedicated to Our Boys of Summer who played for the love of the game."
French led the crowd of about 40 in singing "Take Me Out to the Ballgame."
"Was that good enough, Jan?" someone asked Wetterer.
"No," she responded firmly, so everyone sang again.
Councilman Russ Weaver, the master of ceremonies, said the day was to share baseball memories - people, moments and teams.
Weaver announced that he grew up a Yellowjackets fan and asked the audience not to throw eggs, which he said happened at a Boonsboro-Sharpsburg game.
At Weaver's urging, a few former players stepped forward with nuggets of Sharpsburg baseball lore.
A game between Boonsboro and Sharpsburg drew "2,000 to 3,000 people automatically," and many were seated several hours before game time, said Ed Owens, a Yellowjacket from 1952 to 1959. "The whole town turned out."
"Who won more games, Boonsboro or Sharpsburg?," Weaver asked.
"I don't think that's appropriate," Owens said with a smile.
Roger Moore, 74, whose father was an officer for the Bluebirds, remembered having to chase foul balls as youngster. Back then, foul balls were retrieved, not prizes for spectators, as they are today.
Moore also repeated a legendary gem about Boots Poffenberger of Williamsport, who once played for the Detroit Tigers.
Sharpsburg found out Poffenberger was home, on leave from the Tigers, and gave him $50 to pitch against Boonsboro.
Boonsboro found out about the deal and gave Poffenberger $75 to pitch poorly, which he did, keeping the money from both teams, Moore said.
Those who didn't speak during the plaque ceremony swapped stories in the days leading up to the event or afterward during a reception in Town Hall, when boxes of Cracker Jack and copies of a 1938 Bluebirds scorecard were handed out.
Terry Mose of Hagerstown, whose father was one of the original Bluebirds, was there.
Mose was the batboy in that picture French has and shares the same relatives. He said the team won the league title around 1938.
About 20 years later, just before the league broke up, the Bluebirds won again. Terry Mose, now 69, was on that team and his son, Jeff, now 49, was the batboy.
Tony Cordell, 76, who now lives in Martinsburg, W.Va., managed Sharpsburg's 1956 and 1957 championship teams. He said ballplayers were good friends off the field, but enemies on it.
During one game, a player went into second base with spikes flying high, Ty Cobb- style, causing both teams to run onto the field.
"It was a ... knock 'em out affair," but it ended with no punches, said Cordell, who signed to play for the St. Louis Browns but skipped out of training camp in Pine Bluff, Ark., after a few weeks.
Ralph "Sally" Taylor, who was on the 1930 Bluebirds team and also played for Boonsboro and Mt. Briar, was at the dedication, which was two days after his 87th birthday.
Earl Roulette was there, too. His brother, John, was a Bluebirds captain in the 1930s.
Earl Roulette, 82, said the Sharpsburg Muleskinners - the Bluebirds' predecessor in Sharpsburg - played in a field that belonged to his father, Walter.
The Muleskinners, and then the Bluebirds, next played in Poodle Poffenberger's field before moving to the field near the current elementary school, Earl Roulette said.
Credits. This page was last revised on October 12, 2020. It was originally submitted on November 22, 2014, by F. Robby of Baltimore, Maryland. This page has been viewed 669 times since then and 69 times this year. Photos:   1. submitted on October 12, 2020, by Devry Becker Jones of Washington, District of Columbia.   2, 3. submitted on November 22, 2014, by F. Robby of Baltimore, Maryland. • Bill Pfingsten was the editor who published this page.
Share this page.