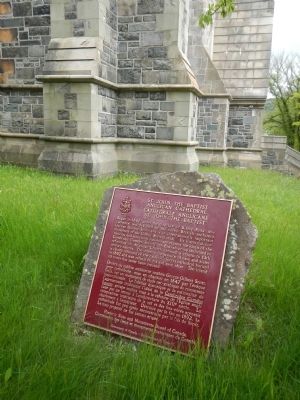 English
Begun in 1847, under the direction of Bishop Feild, this cathedral was designed by the noted British architect George Gilbert Scott and is an internationally important monument of the Gothic Revival style. Its historical correctness and structural rationalism express the ideals of the Cambridge Camden Society, an English group dedicated to reforming the Anglican Church through a return to the 13th century sources. The internal composition of nave and aisles is clearly reflected on the exterior. Scott’s cathedral burned in 1892 and was rebuilt by his son soon after. The intended tower has never been erected. 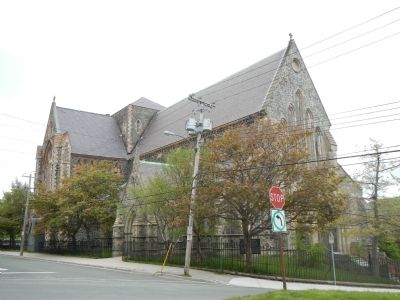 Photographed By Barry Swackhamer, June 22, 2014
2. St. John the Baptist Anglican Cathedral Marker
The marker is located just to the left of the power pole.

Topics and series. This historical marker is listed in this topic list: Churches & Religion. In addition, it is included in the Canada, Historic Sites and Monuments Board series list. A significant historical year for this entry is 1847.

Location. 47° 33.923′ N, 52° 42.52′ W. Marker is in St. John's, Newfoundland and Labrador, in Avalon Peninsula, Newfoundland. Marker is on Church Hill close to Gower Street, on the right when traveling north. Touch for map. Marker is at or near this postal address: 6 Church Hill, St John's NL A1C, Canada. Touch for directions. 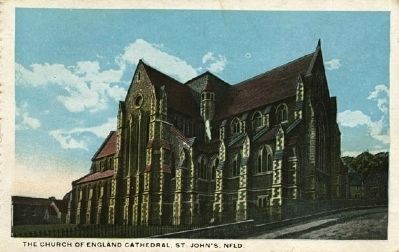 S.H. Parsons & Sons (St. John's, N.L.); Published by S.E. Garland (St. John's, N.L.), 1910
3. The Church of England Cathedral, St. John's, Nfld
Image courtesy of the John Crosbie Perlin collection, Newfoundland and Labrador Provincial Archives.
. The present-day cathedral is built on the site of two previous churches and on land that was once used for public hangings up until the 1750s. The first church on the site was a wooden structure built by Rev. Edward Langham in 1758 and subsequently destroyed in a French raid of the city. (Submitted on November 22, 2014, by Barry Swackhamer of Brentwood, California.) 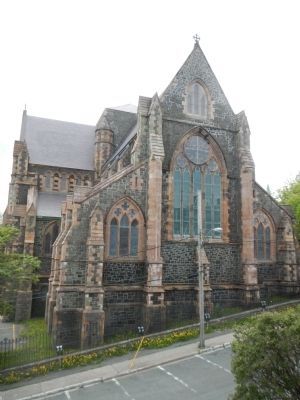