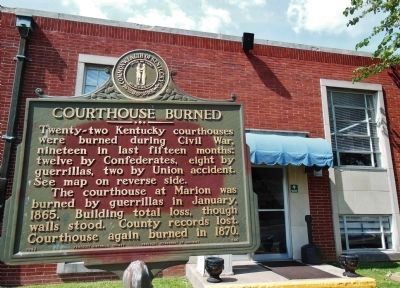 By Cosmos Mariner, June 7, 2012
1. Courthouse Burned Marker
Inscription.
Courthouse Burned. . . Twenty-two Kentucky courthouses were burned during Civil War, nineteen in last fifteen months: twelve by Confederates, eight by guerrillas, two by Union accident. See map on reverse side. . . The courthouse at Marion was burned by guerrillas in January, 1865. Building total loss, though walls stood. County records lost. Courthouse again burned in 1870. . This historical marker was erected in 1960 by Kentucky Historical Society and Kentucky Department of Highways. It is in Marion in Crittenden County Kentucky

The courthouse at Marion was burned by guerrillas in January, 1865. Building total loss, though walls stood. County records lost. Courthouse again burned in 1870.

Topics and series. This historical marker is listed in these topic lists: Government & Politics • War, US Civil. In addition, it is included in the Kentucky Historical Society series list.

Location. 37° 19.948′ N, 88° 4.908′ W. Marker is in Marion, Kentucky, in Crittenden County. Marker is on Carlisle Street 0.1 miles east of Court Street, on the right when traveling west. Marker is located beside the sidewalk leading to the courthouse south entrance. Touch for map. Marker is at or near this postal address: 107 South Main Street, Marion KY 42064, United States of America. Touch for directions.

Other nearby markers. At least 8 other markers are within 8 miles of this marker 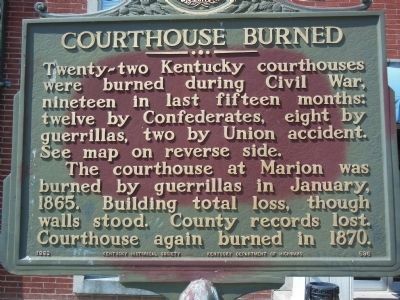 Related markers. Click here for a list of markers that are related to this marker. Twenty-two Kentucky courthouses were burned during the Civil War.

Also see . . .  History of Crittenden County, Kentucky.
By an act of the General Assembly of the Commonwealth of Kentucky on the 26th day of January in 1842, a portion of land lying in Livingston County was set apart as Crittenden County and was organized with a court of its own. The new county, the 91st to be formed in Kentucky, was named in honor of John J. Crittenden, then Governor of the state of Kentucky and later U.S. Senator and Attorney General. (Submitted on November 27, 2014, by Cosmos Mariner of Cape Canaveral, Florida.) 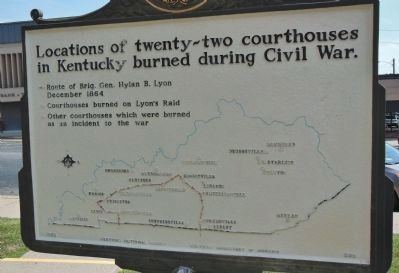 By Cosmos Mariner, June 7, 2012
3. Courthouse Burned Marker (Side 2)
Route of Brig. Gen. Hylan B. Lyon December 1864
Courthouses burned on Lyon's Raid
Other courthouses which were burned as an incident to the war 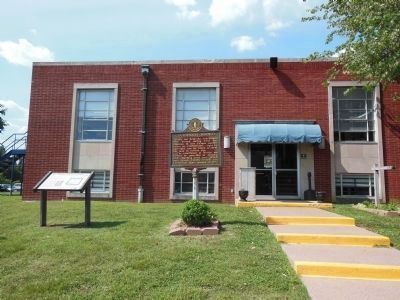 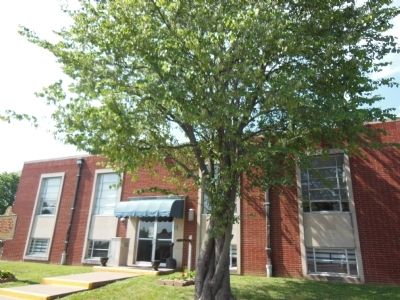 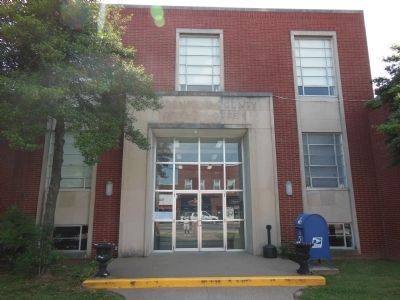