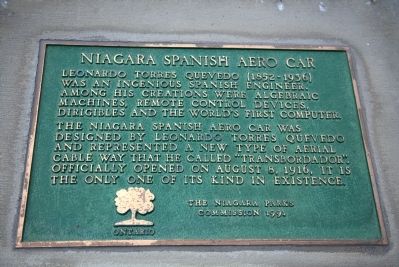 Photographed By J. J. Prats, October 15, 2014
1. Niagara Spanish Aero Car Marker
Inscription.
Niagara Spanish Aero Car. . Leonardo Torres Quevedo (1852–1936) was an ingenious Spanish engineer. Among his creations were algebraic machines, remote control devices, dirigibles and the world’s first computer. , The Niagara Spanish Aero Car was designed by Leonardo Tores Quevedo and represented a new type of aerial cable way that he called “transbordador.” Officially opened on August 8, 1916, it is the only one of its kind in existence. . This historical marker was erected in 1991 by The Niagara Parks Commission, Ontario. It is in Niagara Falls in Niagara Region Ontario

Leonardo Torres Quevedo (1852–1936) was an ingenious Spanish engineer. Among his creations were algebraic machines, remote control devices, dirigibles and the world’s first computer.

The Niagara Spanish Aero Car was designed by Leonardo Tores Quevedo and represented a new type of aerial cable way that he called “transbordador.” Officially opened on August 8, 1916, it is the only one of its kind in existence.

Topics. This historical marker is listed in these topic lists: Industry & Commerce • Railroads & Streetcars. A significant historical year for this entry is 1916.

Location. 43° 7.112′ N, 79° 4.12′ W. Marker is in Niagara Falls, Ontario, in Niagara Region. Marker is on Niagara Parkway south of Victoria Avenue, on the right when traveling north. It is in the viewing area between the Aero Car ticket windows and the gift shop building just outside the covered pavilion. Touch for map. Marker is at or near this postal address: 3850 Niagara Pkwy, Niagara Falls ON L2E 3E8, Canada. Touch for directions.

Other nearby markers. At least 8 other markers are within walking distance of this marker. Whirlpool Rapids Gorge (about 150 meters away, measured 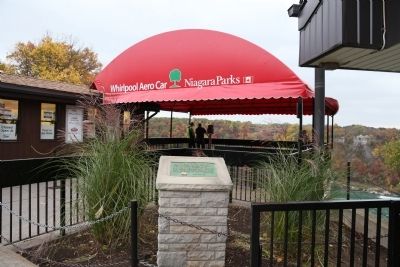 Regarding Niagara Spanish Aero Car. The aero car has a perfect safety record, and an auxiliary engine for use in the event of electric motor or power failure. Except in training exercises, the 4 passenger rescue car has never been used.

Also see . . .
1. Whirlpool Aero Car - A History. Excerpt from first-person account: “Perhaps the most interesting note is that the original ‘rescue device’ for the Aero car was a two wheeled bicycle 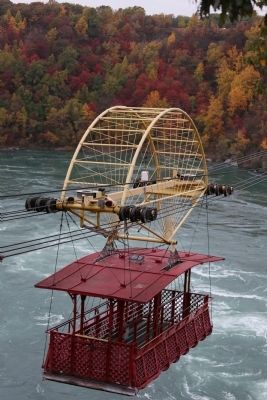 Photographed By J. J. Prats, October 15, 2014
3. The Spanish Aero Car over the Niagara Gorge Whirlpool
device. The wheels ran on one of the cables. The frame, seats and pedals where below the wheels. The pedals drove a long chain that turned one of the wheels. (rear one if I remember correctly) this contraption hung in the equipment room (‘cave’ as we called it) all the time I was in the area. I never saw the device in use, but was told that when the Aero car was inspected (It was licensed as an elevating device at that time) Charlie (the operator in charge at the time) had to mount the bike and ride it across to verify that it was a viable means of rescue. This I am sure would have been a VERY interesting ride.” (Submitted on December 6, 2014.)

2. Information Sheet on the Niagara Spanish Aero Car. This one-page PDF file gives the specifications and history. It includes a photograph of the original car. (Submitted on December 6, 2014.)

3. Atlas Obscura Entry for Niagara Falls Whirlpool Aerocar. “Niagara Falls has long been associated with daredevil stunts of varying levels of bravery or lunacy. In the summer of 1975, a French high wire artist named Henri Rechatin arrived in the predawn hours with his wife, a specially modified motorcycle, and a moto-cross driver with no previous high-wire experience. At 6:30 am they set out across the Aerocar cable, Henri balanced above, his wife Janyck hanging below 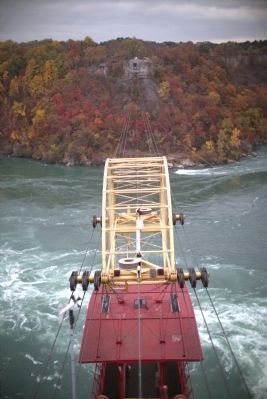 Photographed By J. J. Prats, October 15, 2014
4. View from Stairs to the Embarkation Platform
Car rolls on the six outermost cables. The car is hauled between Colt Point (here) and Thompson Point (visible in the distance) by its center cable using a stationary 75 hp motor at the Colt Point station. It is operated from the control room directly below the photographer.
by her feet. When the wind picked up, Henri walked the final 15 feet to the northern terminal, pulled the motorcycle in, and waited in the Aerocar for the operator to arrive. The three were arrested, but never charged.” (Submitted on December 6, 2014.)

4. Wikipedia Entry for Leonardo Torres y Quevedo. “It has been commonly assumed ... that [Englishman] Charles Babbage’s work on a mechanical digital program-controlled computer, which he started in 1835 ... [was the] forerunner to the modern digital computer. ... Torres Quevedo demonstrated twice, in 1914 and in 1920, that all of the cogwheel functions of a calculating machine like that of Babbage’s could be implemented using electromechanical parts. His 1914 analytical machine used a small memory built with electromagnets; his 1920 machine ... used a typewriter to receive its commands and print its results.” (Submitted on December 6, 2014.) 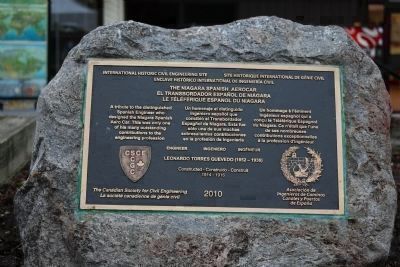 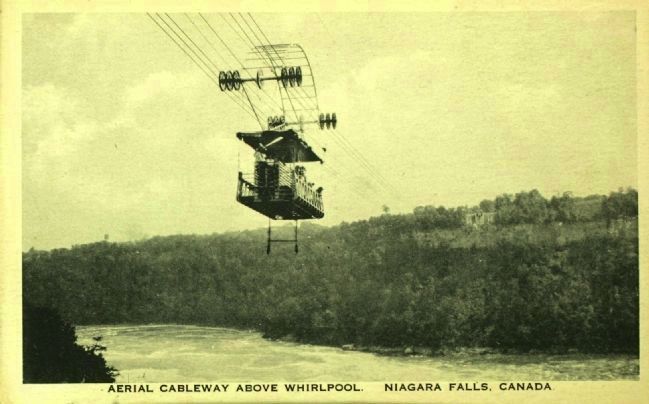 Postcard by the Albertype Company, circa 1930
6. Aerial Cableway Above Whirlpool. Niagara Falls, Canada 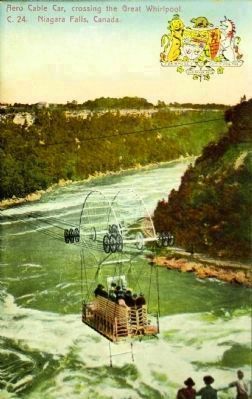