From the Nearby Ravine 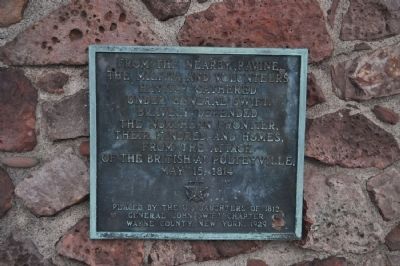 By Yugoboy, March 24, 2013
1. From the Nearby Ravine Marker
Inscription.
From the nearby ravine, the militia and volunteers hastily gathered under General Swift, bravely defended the northern frontier, their kindred and homes, from the attack of the British at Pultneyville, May 15, 1814 . This historical marker was erected in 1929 by U.S. Daughters of 18 12 General John Swift Chapter. It is in Pultneyville in Wayne County New York

From the nearby ravine, the militia and volunteers hastily gathered under General Swift, bravely defended the northern frontier, their kindred and homes, from the attack of the British at Pultneyville, May 15, 1814

Topics and series. This memorial is listed in this topic list: War of 1812. In addition, it is included in the United States Daughters of 1812, National Society series list.

Other nearby markers. At least 8 other markers are within 2 miles of this marker, measured as the crow flies. The Battle of Pultneyville (here, next to this marker); First White Men (a few steps from this marker); Site of Union Church (approx. 0.2 miles away); 100 Years of Dramatics 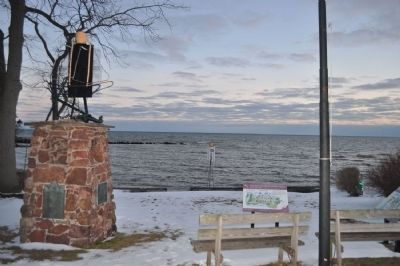 By Yugoboy, March 24, 2013
2. From the Nearby Ravine Marker in situ facing north
This marker is the one on the right (East) side of the brick lighthouse monument. The south side marker (the taller one) commemorates captains of Lake Ontario ships.
(approx. 0.2 miles away); Wreck of the St. Peter (approx. 0.7 miles away); The Church of Jesus Christ of Latter-Day Saints (approx. 0.7 miles away); Underground Railroad Terminus (approx. ¾ mile away); Indian Trail (approx. 1.8 miles away). Touch for a list and map of all markers in Pultneyville.

Also see . . .  FLTimes.com: Way back when in Wayne County: Raid on Pultneyville part of War of 1812. Try to imagine then what the Pultneyville inhabitants must have felt on May 15, 1814. Commodore Sir James Yeo was in charge of the British Lake Ontario fleet and his reputation preceded him. (Submitted on May 11, 2014, by PaulwC3 of Northern, Virginia.) 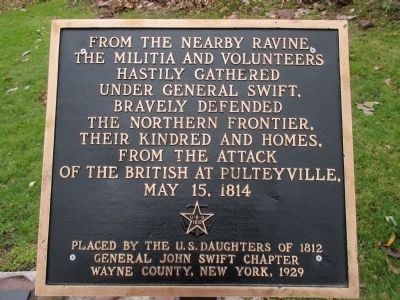 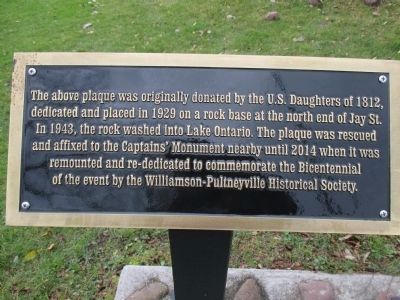 By Anton Schwarzmueller, November 7, 2014
4. Plaque Restoration Dedication
"The above [sic] plaque was originally placed in 1929 on a rock base at the north end of Jay St. In 1943, the rock washed into Lake Ontario. The plaque was rescued and affixed to the Captains' Monument nearby until 2014 when it was remounted and re-dedicated to commemorate the Bicentennial of the event by the Williamson-Pultneyville Historical Society." 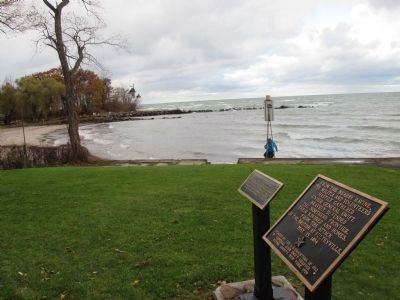 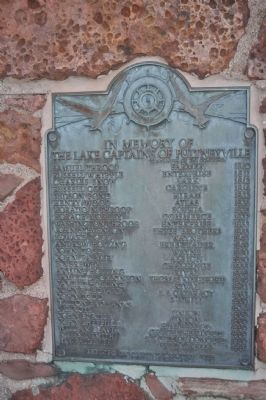