Location. 40° 44.817′ N, 98° 50.716′ W. Marker is in Gibbon, Nebraska, in Buffalo County. Memorial is on 2nd Street east of Court Street (Nebraska Highway 10C), on the right when traveling east. Touch for map. Marker is at or near this postal address: Gibbon Heritage Center, Gibbon NE 68840, United States of America. Touch for directions.

Other nearby markers. At least 8 other markers are within 7 miles of this marker, measured as the crow flies. Gibbon (a few steps from this marker); First Buffalo County Court House (within shouting distance of this marker); The Soldiers Free Homestead Colony (about 400 feet away, measured in a direct line); Nebraska Centre - Boyd Ranche (approx. 1.3 miles away); In Honor of D. E. "Mac" McGregor (approx. 2.8 miles away); a different marker also named Gibbon (approx. 2.8 miles 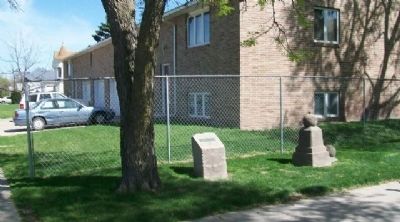 Click or scan to see
this page online
away); Joseph E. Johnson and the Huntsman’s Echo (approx. 6.2 miles away); Shelton Pioneers (approx. 6.3 miles away). Touch for a list and map of all markers in Gibbon.