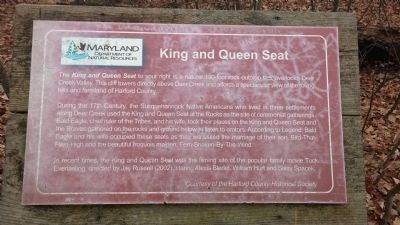 The King and Queen Seat to your right is a natural 190-foot rock outcrop that overlooks Deer Creek Valley. This cliff towers directly above Deer Creek and affords a spectacular view of the rolling hills and farmland of Harford County

During the 17th Century, the Susquehannock Native Americans who lived in three settlements along Deer Creek used the King and Queen Seat at the Rocks as the site of ceremonial gatherings. Bald Eagle, chief rule of the Tribes, and his wife, took their places on the King and Queen Seat and the Braves gathered on the rocks and ground below to listen to orators. According to Legend, Bald Eagle and his wife occupied these seats as they witnessed the marriage of their son, Bird-That-Flies-High and the beautiful Iroquois maiden, Fern-Shaken-By-The-Wind. 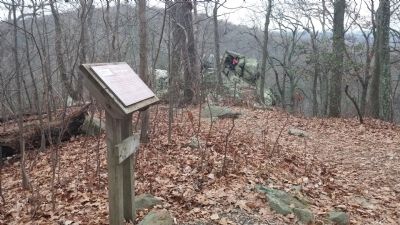 Click or scan to see
this page online
is listed in these topic lists: Entertainment • Native Americans.

Location. 39° 38.133′ N, 76° 24.777′ W. Marker is near Jarrettsville, Maryland, in Harford County. Marker can be reached from St. Clair Bridge Road, 0.8 miles west of Rocks Road (Maryland Route 24), on the left when traveling west. Parking lot for the King and Queen Seat is about 1/2 mile from St. Clair Bridge Road, and the marker is about .2 miles from the parking lot along a trail to the King and Queen Seat rock formation. Touch for map. Marker is in this post office area: Jarrettsville MD 21084, United States of America. Touch for directions. 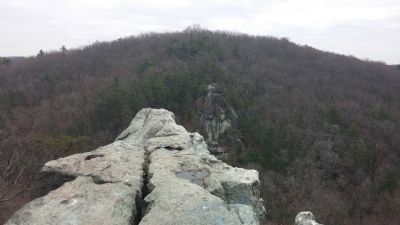 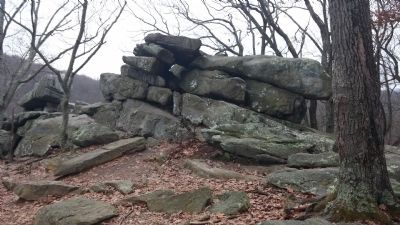 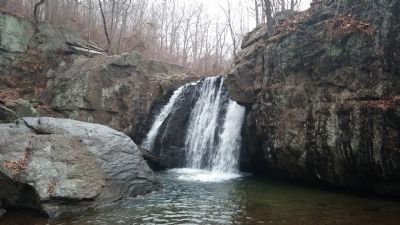