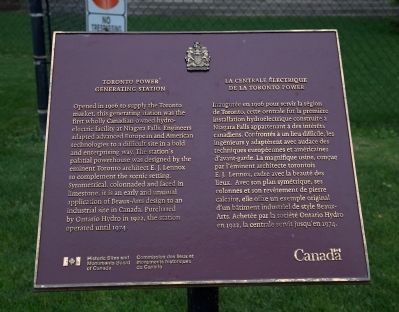 Opened in 1906 to supply the Toronto market, this generating station was the first wholly Canadian-owned hydro-electric facility at Niagara Falls. Engineers adapted advanced European and American technologies to a difficult site in a bold and enterprising way. The station’s palatial powerhouse was designed by the eminent Toronto architect E. J. Lennox to complement the scenic setting. Symmetrical, colonnaded and faced in limestone, it is an early and unusual application of Beaux-Arts design to an industrial site in Canada. Purchased by Ontario Hydro in 1922, the station operated until 1974. 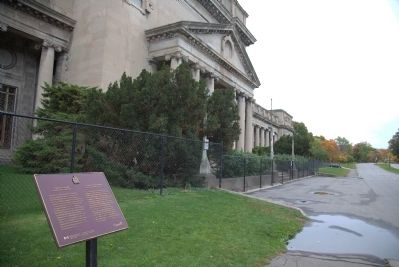 Topics. This historical marker is listed in this topic list: Notable Buildings. A significant historical year for this entry is 1906.

Regarding Toronto Power Generating Station. The turbines at this station were designed for 25

Photographed By J. J. Prats, October 15, 2014
3. Toronto Power Generating Station Marker
Hz AC power and that is what they supplied from 1906 until 1974. Known as low-frequency alternating current, it is still used in industrial applications and for railway electrification.

Also see . . .
1. Wikipedia Entry. “The plant is built on top of a deep wheel pit, with turbines at the bottom of the pit, turning generators at the top by means of long vertical shafts. The water from the turbines runs out through a brick lined tailrace which eventually comes out at the base of the falls. In its prime, it had a generating capacity of 137,500 horsepower or 102,500 kW.” (Submitted on December 19, 2014.)

2. Entry at InvisibleThreads.com. Photos of the interior of this building. “By far the most beautiful abandoned building I've visited was this one. Unlike other large industrial buildings, this was no large homogeneous box. This had a sense of design — an architectural vision.” (Submitted on December 19, 2014.) 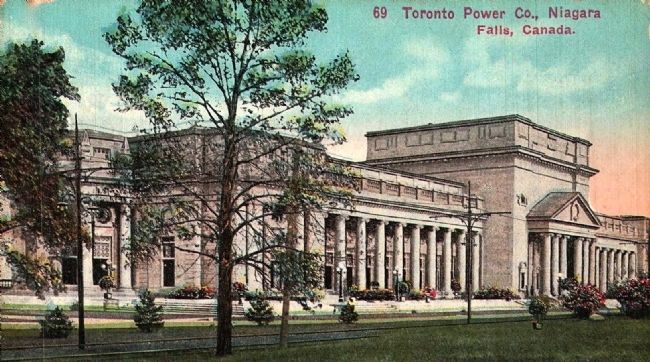