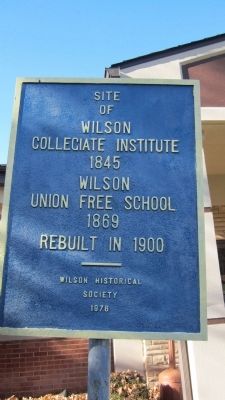 Location. 43° 18.436′ N, 78° 49.595′ W. Marker is in Wilson, New York, in Niagara County. Marker is at the intersection of Lake Street (New York State Route 425) and Seminary Street, on the left when traveling north on Lake Street. The marker is alongside the walkway to the front center entrance of Wilson Town Hall. Touch for map. Marker is at or near this postal address: 375 Lake Street, Wilson NY 14172, United States of America. Touch for directions. 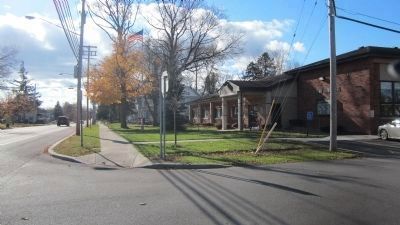 Regarding Wilson Collegiate Institute 1845. The Wilson Collegiate Institute was established on this site on 25 January 1845, having been proposed by Luther Wilson, son of town founder Reuben Wilson. The land was donated by bachelor Simon Sheldon and citizens donated funds. The building was cobblestone, 40'x60', 4800 sq. ft., with classrooms and library on the first floor and an auditorium on the second floor. The library had over 300 books (predominantly literature, history and philosophy), a human skeleton, and about 300 mineral specimens. Male and female students received the same instruction. Some of the subjects taught were languages, natural science, philosophy, music, drawing and painting, and New York State teacher training. The Institute became financially untenable due to competition, which led the trustees to deed the Institute to the Union Free School District in 1869. The curriculum was expanded. Recess was replaced by marching, military drills, and calisthenics in 1894.

As the student body grew after the compulsory education 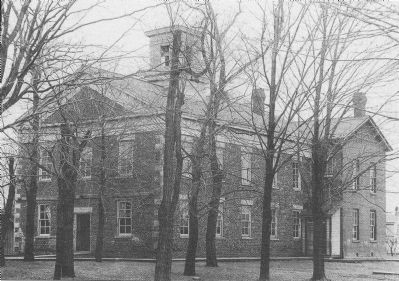 By Anton Schwarzmueller, November 20, 2013
3. Wilson Collegiate Institute built 1845.
Wilson Historical Society picture of the cobblestone building, apparently showing the 1899 brick addition at the rear. It became the Union Free School in 1869.
law of 1895, a brick addition for primary grades was attached to the cobblestone building. The next year, 1900, a 60' brick building was added to replace the cobblestone building. In 1935 the current Wilson High School was built on the opposite side of the street. As the current building expanded, the old building was still used for industrial arts and some academic classes. On 2 August 1957 the old school burned from sparks landing on the roof from a nearby fire. Today the site is Wilson Town Hall, built in 1960. A long mural painted on the interior wall facing the center entrance of Wilson High School depicts the progression of school buildings in Wilson. 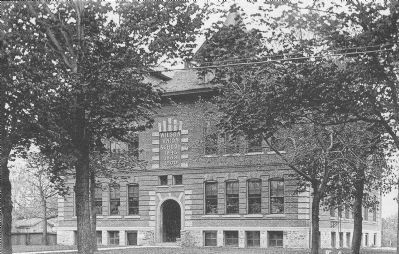