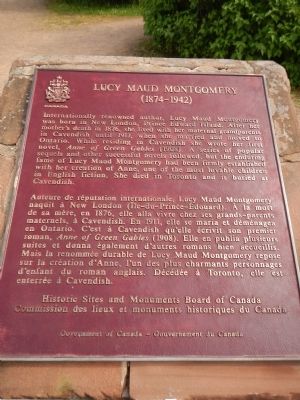 English:
Internationally renowned author, Lucy Maud Montgomery was born in New London, Prince Edward Island. After her mother's death in 1876, she lived with her maternal grandparents in Cavendish until 1911, when she married and moved to Ontario. While residing in Cavendish she wrote her first novel, Anne of Green Gables (1908). A series of popular sequels and other successful novels followed, but the enduring fame of Lucy Maud Montgomery had been firmly established with her creation of Anne, one of the most lovable children in English fiction. She died in Toronto and is buried at Cavendish.