By William Fischer, Jr., April 12, 2012
1. Veterans Memorial Marker
Inscription.
Veterans Memorial. .
To the loving memory of those men and women who gave their lives in all past wars and to all veterans who served our great country we dedicate this tank We thank you for your sacrifices

This M-60 forty five ton Army tank was donated by the Kansas Army National Guard to the citizens of Baxter Springs through the efforts of Lt Col Joe Broyle Wayne Cook and the City of Baxter Springs. . This memorial was erected by Baxter Vault. It is in Baxter Springs in Cherokee County Kansas

Location. 37° 1.706′ N, 94° 44.011′ W. Marker is in Baxter Springs, Kansas, in Cherokee County. Memorial is on East Avenue south of 7th Street, on the left when traveling south. Marker and tank are on the grounds of the Baxter Springs Heritage Center & Museum. Touch for map. Marker is at or near this postal address: 740 East Avenue, Baxter Springs KS 66713, United States of America. Touch for directions.

Other nearby markers. At least 8 other markers are within walking distance of this marker. Black Dog Trail (a few steps from this marker); Last Pratt Pony Truss Bridge in Cherokee County 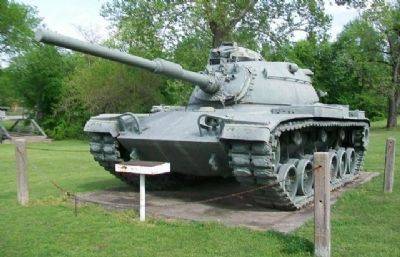