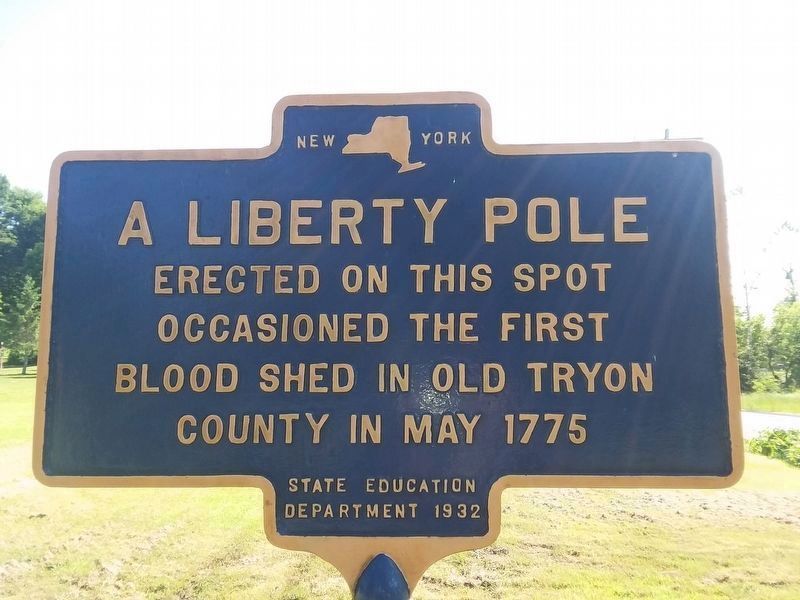 Photographed By TeamOHE, June 4, 2019
1. A Liberty Pole Marker
Inscription.
A Liberty Pole erected on this spot occasioned the first blood shed in old Tryon County in May 1776 . This historical marker was erected in 1932 by New York State Education Department. It is Near Fonda in Montgomery County New York

Topics. This historical marker is listed in this topic list: War, US Revolutionary. A significant historical month for this entry is May 1776.

1. More detail on the incident described in "A Liberty Pole"
From “The Pictorial Field-book of the Revolution” by Benson John Lossing, 1855.

“In the spring of 1775, just before the second Congress assembled at Philadelphia, at a court holden at Johnstown, the Loyalists made a demonstration against the proceedings of the National Council, by drawing up and obtaining signatures to a declaration disapproving of the acts of that body in the preceding autumn. This proceeding of the Tories aroused the indignation of the Whigs, who composed a considerable majority of the whites in Tryon county. Committees were appointed and public meetings were called in every district in the county. The first was held at the house of John Veeder, in Caughnawaga, where patriotic speeches were made, and a liberty pole, a most offensive object to the eyes of the Loyalists, was erected. Before this was accomplished, Sir John Johnson, accompanied by Colonel Claus, Guy Johnson and Colonel John Butler, with a large number of their retainers, armed with swords and pistols, arrived upon the ground and interrupted the proceedings. Guy Johnson mounted a high stoop near the old church and harangued the people. He expatiated upon the strength of the king and government, and the folly of opposing the authority of the crown. He had not a conciliatory 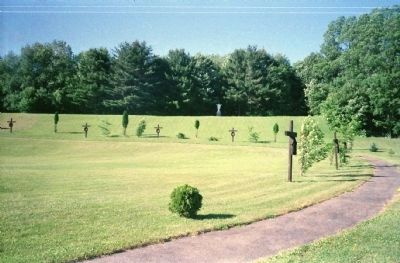 Photographed By David Graff, circa June 24, 1997
3. Kateri Tekakwitha Shrine Grounds
Near the marker. The crosses represent the Stations of the Cross.
word for the people, but denounced their proceedings in virulent and abusive language, so irritating, that Jacob Sammons, a leader among the Whigs, could no longer restrain himself, but boldly pronounced the speaker a liar and a villain. Johnson leaped from this tribune and seized Sammons by the throat; one of his party felled the patriot to the ground by a blow from a loaded whip-handle, and then bestrode the body. When Sammons recovered from the momentary stupor, he hurled the fellow from him, and springing upon his feet, stripped off his coat and prepared to fight, when he was again knocked down. Most of his Whig friends had fled in alarm, and he was carried to his father’s house, ‘bearing upon his body the first scars of the Revolutionary contest in the county of Tryon’.”
— Submitted February 27, 2015, by J. Makali Bruton of Querétaro, Mexico.
Credits. This page was last revised on December 22, 2020. It was originally submitted on February 17, 2013, by David Graff of Halifax, Nova Scotia. This page has been viewed 493 times since then and 16 times this year. Last updated on February 27, 2015, by J. Makali Bruton of Querétaro, Mexico. Photos:   1. submitted on December 11, 2020, by TeamOHE of Napoleon, Ohio.   2, 3. submitted on February 17, 2013, by David Graff of Halifax, Nova Scotia. • Bill Pfingsten was the editor who published this page.
Share this page.