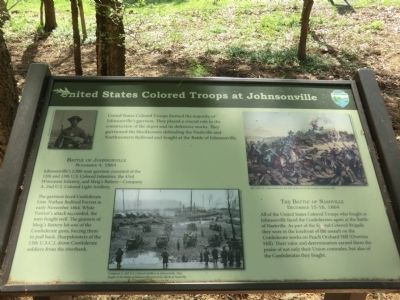 United States Colored Troops formed the majority of Johnsonville's garrison. They played a crucial role in the construction of the depot and its defensive works. They garrisoned the blockhouse defending the Nashville and Northwestern Railroad and fought at the Battle of Johnsonville.

The garrison faced Confederate Gen. Nathan Bedford Forrest in early November 1864. While Forrest's attack succeeded, the men fought well. The gunners of Meig's Battery hit one of the Confederate guns, forcing them to pull back. Sharpshooters of the 13th U.S.C.I. drove Confederate soldiers from the riverbank.

All of the United States Colored Troops who fought at Johnsonville faced the Confederates again at the Battle of Nashville. As part of the Second Colored Brigade they were in the forefront of the assault on the Confederate 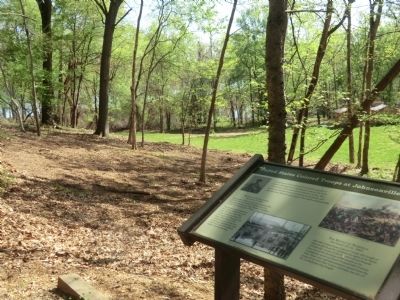 Click or scan to see
this page online
works on Peach Orchard Hill (Overton Hill). Their valor and determination earned them the praise of not only their Union comrades, but also of the Confederates they fought.

Topics. This historical marker is listed in these topic lists: African Americans • War, US Civil. A significant historical month for this entry is November 1864.