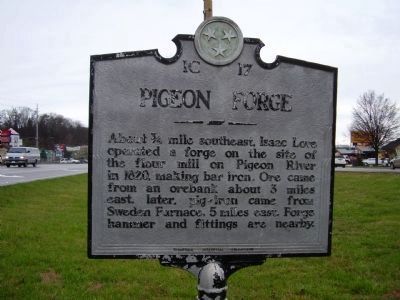 By Stanley and Terrie Howard, March 15, 2009
1. Pigeon Forge Marker
Inscription.
Pigeon Forge. . About 3/4 mile southeast, Isaac Love operated a forge on the site of the flour mill on Pigeon River in 1820, making bar iron. Ore came from an orebank about 3 miles east, later, pig-iron came from Sweden Furnace, 5 miles east. Forge hammer and fittings are nearby. . This historical marker was erected by Tennessee Historical Commission. It is in Pigeon Forge in Sevier County Tennessee

About 3/4 mile southeast, Isaac Love operated a forge on the site of the flour mill on Pigeon River in 1820, making bar iron. Ore came from an orebank about 3 miles east, later, pig-iron came from Sweden Furnace, 5 miles east. Forge hammer and fittings are nearby.

Topics and series. This historical marker is listed in this topic list: Industry & Commerce. In addition, it is included in the Tennessee Historical Commission series list. A significant historical year for this entry is 1820.

Other nearby markers. At least 8 other markers are within walking distance of this marker. Pigeon Forge Attractions (about 500 feet away, measured in a direct line); Broady Dairy (approx. 0.2 miles away); Pigeon River Railroad (approx. ¾ mile away); First Baptist Church Pigeon Forge (approx. 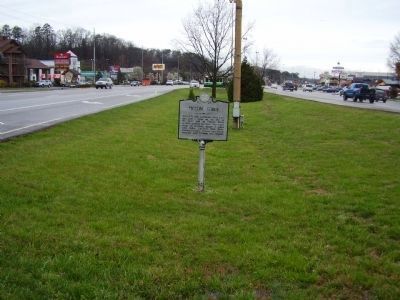 Additional commentary.
1. The Forge
The Forge part of the name comes from a booming ‘forge’ built in 1817 by Isaac Love. This was a site near the present Old Mill. With its first business being iron and furnace forge, Pigeon Forge has progressed 10 fold from pioneer town to profitable town Sitting on land that was once Cherokee hunting Ground, a 1700’s treaty opened the valley up for settlement. Mordecai Lewis was a Pigeon Forge pioneer who received a 151-acre land grant and built the now historic Old Mill around 1790. In 1849, the mill (or forge tract) was purchased by Mr. John Sevier Trotter who sold it to Mr. John Marshall McMahan. Mr. John Marshall McMahan sold one fourth of the mill interest to A.T. Householder in December of 1900. His transfer deed mentioned a sawmill, gristmill and a carding machine. The Forge that gave Pigeon Forge its name was dismantled sometime before 1884. Some believe it was moved to Kentucky. The five hundred pound hammer used in the forge was preserved. The hammer was displayed at the Forge Hammer Grill owned and operated by Henry and Fannie Butler. Forge Hammer Grill later became Butler’s Farm Restaurant and, finally, the Apple Tree Inn. For years, a live apple tree grew inside the dining area of the restaurant. It was first owned by Dick and Mildred Bunting and is now in the hands of Garnett Cole and her son Kyle. The forge’s hammer continued to remain on display at the Apple Tree Inn for many years. It is still in the possession of the Cole Family.
— Submitted June 19, 2009, by Stanley and Terrie Howard of Greer, South Carolina.
Credits. This page was last revised on June 16, 2016. It was originally submitted on March 22, 2009, by Stanley and Terrie Howard of Greer, South Carolina. This page has been viewed 1,368 times since then and 9 times this year. Last updated on April 21, 2015, by J. Makali Bruton of Querétaro, Mexico. Photos:   1, 2. submitted on March 22, 2009, by Stanley and Terrie Howard of Greer, South Carolina. • Andrew Ruppenstein was the editor who published this page.
Share This Page.