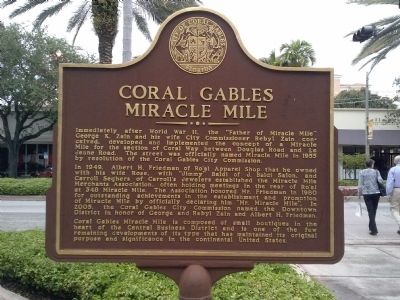 Immediately after World War II, the "Father of Miracle Mile," George K. Zain and his wife, City Commissioner Rebyl Zain conceived, developed and implemented the concept of a Miracle Mile for the section of Coral Way between Douglas Road and Le Jeune Road. The street was officially named Miracle Mile in 1955 by resolution of the Coral Gables City Commission.

In 1949, Albert H. Friedman of Ro'al Apparel Shop that he owned with his wife Rose, with "Jimmy" Baldi of J. Baldi Salon, and Carroll Seghers of Carroll's Jewelers established the Miracle Mile Merchants Association, often holding meetings in the rear of Ro'al at 348 Miracle Mile. The Association honored Mr. Friedman in 1980 for outstanding achievement in the establishment and promotion of Miracle Mile by officially declaring him "Mr. Miracle Mile." In 2005, the Coral Gables City Commission named the Downtown District in honor of George and Rebyl Zain and Albert H. Friedman. 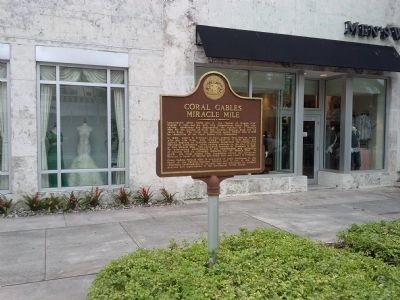 Click or scan to see
this page online
and significance in the continental United States.

Erected by City of Coral Gables.

Topics. This historical marker is listed in this topic list: Industry & Commerce. A significant historical year for this entry is 1955. 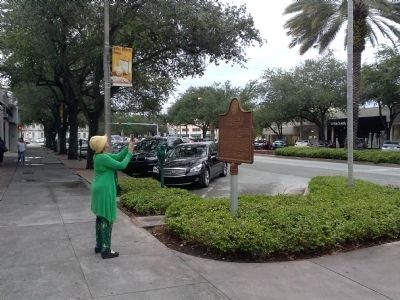 Photographed By Marsha A. Matson, April 9, 2015
3. View of Miracle Mile and marker 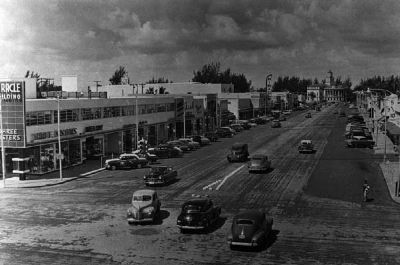